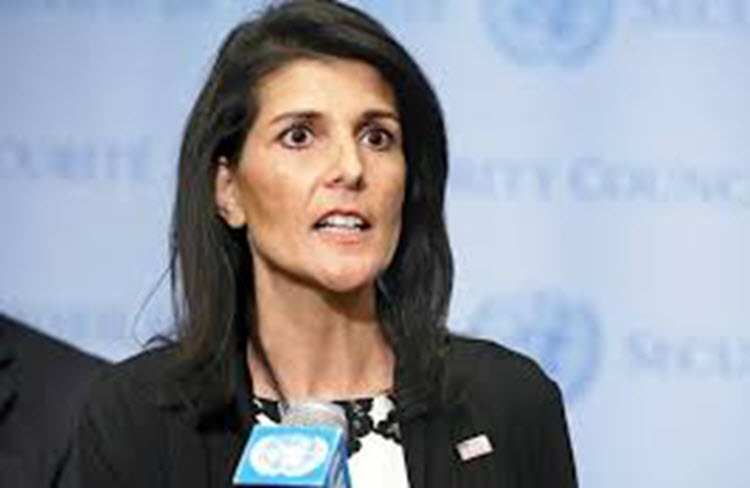 More than half of the people of Syria have been displaced and there have been over 400,000 deaths as a result of the war.

The civil war started in 2011 when Assad cracked down on pro-democracy protesters. Islamic State militants took advance of the resulting chaos and seized territory in Iraq and Syria.

Haley made these comments after U.N. Syria mediator Staffan de Mistura held a briefing with the Security Council after ten days of talks in Geneva between the parties.

When asked whether the United States thinks that Syrian President Bashar al-Assad who has the backing of Iran and Russia should stand down, she failed to respond.

The war in Syria has been going on for six years now and there are calls for the United States to act. Observers are also keen to see how President Trump will deal with Islamic State, especially now that he has pledged to improve relations with Russia. So far Trump has been vague in his plans regarding Syria.

Haley said that the US supports the UN and the Syrian mediator’s work. She said: “The United States absolutely supports Staffan de Mistura and the work that he’s doing, we support the U.N. process, we support the talks in Geneva, we want to see them continue.”

Iran has a significant presence in Syria, since the beginning of the war, and is backing the Lebanese Shi’ite Muslim group Hezbollah who are present in the country.

After the briefing, De Mistura said to reporters that another round of peace talks would take place on 23rd March. Speaking about the latest round of talks, he said that an agenda and timeline was established and there was agreement “on substance”.

He said that the talks went better than expected. “We did not expect miracles and frankly we did not have miracles, but we achieved much more than many people had imagined we could have. No one left, everybody stayed.”