Iran tells West to stay out of woman’s stoning case

AFP: Iran told Western nations on Tuesday to stay out of the case of a woman who faces death by stoning, warning it will not tolerate any interference in the matter still under examination. 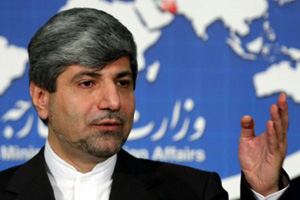 TEHRAN (AFP) — Iran told Western nations on Tuesday to stay out of the case of a woman who faces death by stoning, warning it will not tolerate any interference in the matter still under examination.

“Independent nations do not allow other countries to interfere in their judicial affairs,” Iranian foreign ministry spokesman Ramin Mehmanparast told a news conference.

The official was responding to questions from reporters about the status of Sakineh Mohammadi-Ashtiani, a 43-year-old mother of two sentenced to death by stoning by an Iranian court.

“Western nations must not pressurise and hype it (the case) up… judicial cases have precise procedures, especially when it concerns murder.

“If a person committed a crime in Iran, that person is prosecuted which is normal, especially if she has killed somebody. The heavier the sentence, the more meticulous we are in carrying it out. This is being done,” said Mehmanparast.

Western nations and human rights groups have come out strongly against Mohammadi-Ashtiani’s stoning sentence and warned that her execution is imminent.

Iranian judiciary chief Sadeq Larijani has temporarily suspended the sentence from being carried out.

Officials in the Islamic republic maintain the woman was handed the stoning sentence for adultery and for being an accomplice in her husband’s murder.

Her lawyers and London-based rights watchdog Amnesty International say she was only sentenced for having an “illicit relationship” with two men and that the murder charge was adopted later.

Mehmanparast said the outcry from the West over her case was “irrational” and “rather a politicised approach”.

When asked about Brazilian President Luiz Inacio Lula da Silva’s proposal to offer Mohammadi-Ashtiani asylum, he said Brazil would come to “understand it is a fuss created to undermine relations” between the two countries.

The hardliner said Iran’s judiciary chief agreed Mohammadi-Ashtiani should not be sent to Brazil.

“I think there is no need to create some trouble for President Lula and to send her to Brazil. We are keen to export our technology to Brazil rather than such people. I think the problem will be solved” in Iran, Ahmadinejad said in comments posted on the channel’s website.

New York Times: Even before his daughter and four other...

Iran Focus London, 29 October - In an article published in...