RFE/RL: A female commander of the pro-government Basij militia, Zohreh Abbasi, has said that her unit has introduced a special program that allows baby girls to be registered as members of the force and receive training. 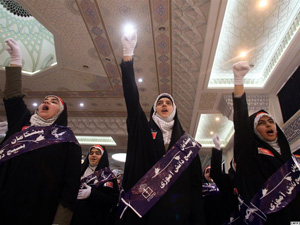 A female commander of the pro-government Basij militia, Zohreh Abbasi, has said that her unit has introduced a special program that allows baby girls to be registered as members of the force and receive training.

Abbasi, who heads the Hossein Haj Mousaee unit, said that in the past six years 23 baby girls had been trained as Basij members through “Koranic, cultural, educational, and military” classes.

“In this regard Basij mothers register their baby girls 40 days after they were born at the Hossein Haj Mousaee unit by presenting documents and IDs,” Abbasi was quoted as saying by Iranian news websites.

She said 420 women are currently members of the Hossein Haj Mousaee Basij unit. She added that two babies have recently been born and that work is under way to prepare a dossiers for the new “Basij babies” and enroll them in the special program.

Hossein Aryan and Roozbeh Bolhari of RFE/RL’s Radio Farda had previously reported on how “resistance centers” were now being built in elementary schools in order to prepare children for joining Basij units.

The “Basij babies” program suggests that some in the Islamic republic believe that children should be indoctrinated not at elementary schools but even before that — as soon as they’re born, in order to prevent them from turning into potential critics or independent individuals who want to decide about the way they live themselves and not based on the rules set by the Iranian establishment.

Former parliament speaker Gholam Ali Haddad Adel, who is an ally of President Mahmud Ahmadinejad, once said that Iranian youth and women were being approached by Iran’s “enemies.”

Now it appears that some hard-liners believe that the “enemy” might have plans even for Iran’s newborns.

Bloomberg: Saudi Arabia refused to accept the membership of...

AFP: The United Nations on Tuesday appealed to the...