An adulteress could in theory be stoned, Iran prosecutor says

Washington Post: Iran’s chief prosecutor on Monday contradicted earlier statements by President Mahmoud Ahmadinejad by saying a woman convicted of adultery could in theory still be stoned to death for her crime. 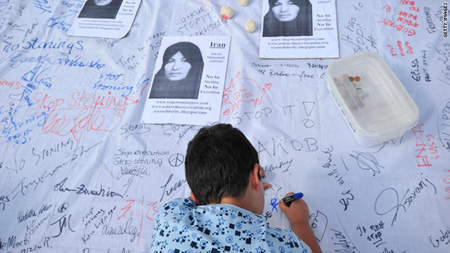 TEHRAN – Iran’s chief prosecutor on Monday contradicted earlier statements by President Mahmoud Ahmadinejad by saying a woman convicted of adultery could in theory still be stoned to death for her crime.

But Gholam Hossein Mohseni-Ejei stressed that Sakineh Mohammadi Ashtiani, who was convicted of cheating on her husband in 2006, is more likely to be executed by hanging, instead of receiving the stoning sentence, a Shiite Islamic punishment for adultery.

“In regard to Ms. Sakineh Mohammadi Ashtiani, such a verdict [stoning] has been issued, but the case must finish its process and stages,” Mohseni-Ejei, a former minister of intelligence, said during a weekly press conference. “In the holy religion of Islam the methods to prove extra-marital affairs is very hard,” he said, explaining that a conviction for murder weighed more heavily than one for adultery.

Key elements of the case against Ashtiani are in dispute. She originally pleaded guilty in May 2006 to having an illicit relationship with two men after the death of her husband and received 99 lashes as punishment. Four months later, when a separate court prosecuted one of the two men on charges of killing her husband, she was convicted of adultery and sentenced to death by stoning.

Iranian authorities subsequently said Ashtiani had committed murder. In August, she confessed on state-run television that she had been an accomplice in her husband’s murder and had committed adultery with his cousin. But her attorney said she made the statements under duress after being tortured for two days, and she told London’s Guardian newspaper through an intermediary that Iranian officials were lying about the murder charge.

Ahmadinejad last week denied during an interview with Christiane Amanpour on ABC’s “This Week” that Ashtiani was ever sentenced to stoning, saying the “news was made up.”

The case has led to worldwide protests, even igniting a war of words between an Iranian state newspaper and the wife of the French president. The paper called Carla Bruni a “prostitute” for publicly supporting the convicted Iranian woman.

Coming US Crackdown on Iran