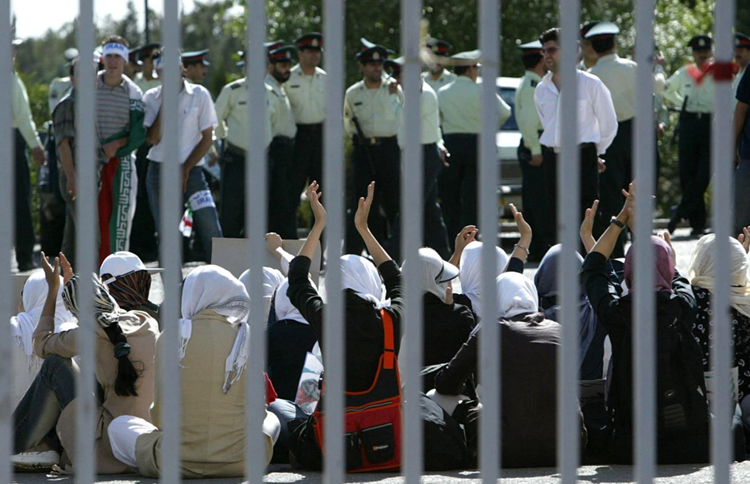 For decades, Iranian women have been banned from entering sports stadiums because of the mullahs’ sexist laws, which have turned them into a key and visible battleground for the women of Iran against the misogynist mullahs.

Now, the World Football Federation (FIFA) has given the Iranian Federation until August 31 to determine whether women are to be allowed into sports stadiums. Dariush Mostafavi, head of the Football Federation’s Professional Licensing Appeals Committee, said that FIFA is “serious” that women should be able to enter sports stadiums in league games. This violation of FIFA’s non-discrimination principle could mean that the Iranian Federation is suspended and expelled from FIFA.

However, this has sparked a backlash from the Regime, with many officials publically opposing the move.

High-ranking cleric Nasser Makarem Shirazi claimed that the atmosphere in sports stadiums is “not suitable for women” for various bizarre reasons, including male athletes not being properly dressed and wanting to prevent “youth interaction”, which he said was the “source of many ethical and social problems”.

Iran’s prosecutor general Mohammad Jafar Montazeri gave a speech in which he said asked why FIFA was concerned about “a few women among the 10, 500, 1,000 or 5,000 spectators who go to watch a football match in a country”.

Montazeri continued: “Do you think their emphasis on the presence of women in football stadiums is because they really care about the well-being of our women or our sports facilities? Do you really think they care about our women being deprived of watching football? Don’t take these issues lightly.”

While the state-run Asr-e Iran website advised that FIFA considers this a “gender discrimination” case, printing out the relevant FIFA statues, while quoting Montazeri as saying that there was “no need for women to enter the sports stadiums”.

The Iranian government’s sexist policies, which deprive women of their most basic rights, has drawn the attention and condemnation of international bodies and this shows a growing international rejection of the regime itself. It is no longer acceptable for international bodies, including FIFA, to ignore the gender-based apartheid enforced by the Iranian authorities.

The Women’s Committee of the National Council of Resistance of Iran said: “It is time for FIFA to act in favour of Iranian women and impose serious sporting sanctions on the mullahs’ regime to force it to respect equal participation of women in sports and their right to freely enter all sports stadiums.”