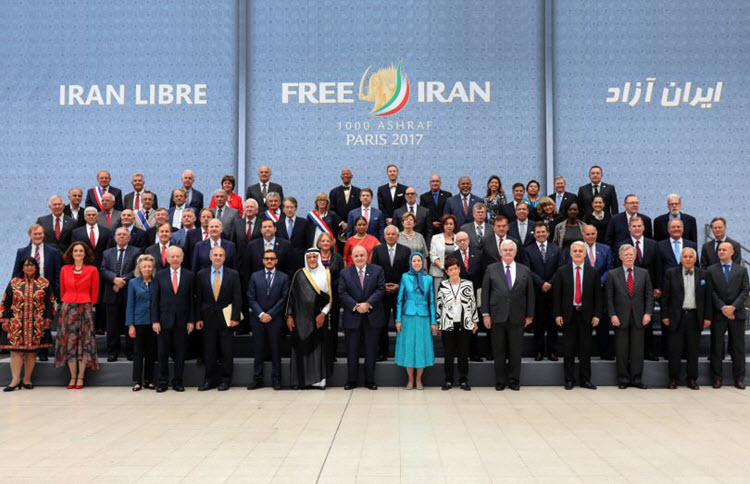 Iranian society is deeply troubled by the country’s economic and social crises. There has been a significant increase in protests staged by people from all walks of life, including teachers, factory workers, truckers, and others.

The annual Grand Gathering in Paris on June 30 will be held by the National Council of Resistance of Iran (NCRI) and this year, it will support Iranian people’s turn of the year uprising, as well as the ongoing protests that have followed. The NCRI promotes the Iranian people’s demand for a regime change, and the gathering shows that Iranian people’s protests are backed both domestically and by the international community.

While the event is still weeks away, officials of Iran and its media have made remarks in a press conference held on Sunday June 11th, 2018. According to Iran’s Foreign Ministry Spokesman, Bahram Ghasemi, “Rouhani’s government has had talks with French officials for cancelling the gathering.”

Ghasemi told France that “the MEK (The People’s Mojahedin Organization of Iran which is the main force inside NCRI) holds gatherings in France every once in a while. This is not acceptable for Iran, as we’ve said that no double standard approach should be adopted, thereby dividing the terrorism into a good one and a bad one.” He then threatened France, saying “those who give permit for such gatherings are wrong, as they themselves will be affected by the consequences as well.”

The National Security Commission Spokesman, Naghavi Hosseini, also attacked France for hosting MEK’s Grand Gathering in Paris. Hosseini said in an interview with state-run media, “MEK activities in Europe and their gatherings in European countries is contrary to such countries’ claimed policy of fighting against terrorism.” He added, “The MEK is going to harm Iran-Europe relationships”, as well as, “the group is trying to destroy all peaceful interactions between Iran and Europe, and their upcoming gathering is aimed at affecting Europeans’ approach, particularly at a time when JCPOA-related talks are under way between Europe and Iran.”

Warning Iran’s Foreign Ministry about the consequences of NCRI’s Grand Gathering in Paris, Hosseini insisted, “…under such circumstances, Iran’s diplomacy has to start talks with European counterparts, as the Islamic Republic will have to adopt a new and different policy should the Europeans decide to continue their partnership and interaction with the MEK.”

Kazem Jalali, chairman of Iran’s Parliamentary Research Center, as well as the head of Iran-Europe Parliamentary Relationships Group, have both written letters to their counterparts in European and French parliaments and the French Senate, warning them of “NCRI’s hostile moves in France” and expressing “Iran’s disapproval of European countries’ policy that allows such terrorist group’s gatherings be held in Europe.”

Jalali also wrote a letter to European Parliament’s delegation for relations with Iran. In it, he noted that after the MEK was taken off the European Union’s terrorist list in 2009, a number of European officials as well as European Parliament members have participated in their meetings and gatherings. He warns Europeans that terrorist and extremist activities will increase across Europe if they allow NCRI’s gathering to be held. “To prevent expansion of terrorist and extremist activities to Europe, we need to have bilateral co-operation and fair interaction, and avoid double approaches”, wrote Jalali.

He linked the NCRI’s Grand Gathering in Paris to the nuclear deal crisis, saying “it shouldn’t be forgotten that the NCRI/MEK has not spared any direct or indirect effort to create a rift between the two sides, particularly following the US president’s unilateral and unlawful withdrawal from the deal.”

Mohammad javad Larijani, the judiciary’s International Deputy responded to the moderator’s question in an interview with a state-sponsored television program about the future of the regime following the NCRI’s gathering, saying, “MEK/NCRI is going to hold a gathering next week. A number of European and American officials, including Rudy Giuliani and John Bolton who is now the White House National Security Advisor, delivered speeches in MEK’s gathering over the past several years, for which we have discussed our disapproval with the Europeans. Considering MEK’s increased activities these days, the question is what role the Americans are going to play in this anti-Iranian scenario?”

In response to questions about the MEK’s campaign on the protests inside Iran, he said, “Western countries took the MEK off their terror list and now the group is once again active in Iran. The West believes that the MEK is the only group that could both be active in Iran and perform as an active political organization abroad as well.”

Iran’s three branches, government, parliament, and judiciary, have campaigned against the NCRI’s Grand Gathering, making it clear that they fear its domestic and international consequences.

Across Iran, the Grand Gathering will inspire the protesters and show them that their protests are backed both domestically, and by the international community. It will display the Iranian people’s solidarity to the overthrow of the Mullahs to the world. It will recognize the NCRI as a democratic alternative.

The NCRI’s Grand Gathering is a domestic and international call to overthrow the Iranian regime.