BBC: Taking the boat across Dubai’s old creek is like a journey back in time. 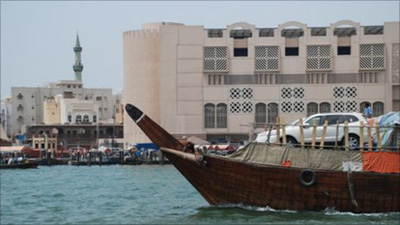 Taking the boat across Dubai’s old creek is like a journey back in time.

Back to the days when the city was little more than a trading port of pearls, spices and gold, long before it struck oil and thus changed beyond recognition.

Today, in this noisy corner of the city, little has changed.

Along the chaotic quayside there are hundreds of traditional, wooden dhows. Some sit low in the water, packed heavily with boxes and crates.

On the front of one are two large 4×4 cars, balanced close to the edge and tied on with rope, but no one here seems worried.

Other ships lie empty waiting for their next load. Along the quayside is their cargo.

Piled high across the concrete are thousands of cardboard boxes. Inside, there is everything, from TVs and fridges, to batteries and paint. There are toys and blankets, car tyres and shoes.

That is because much of the goods here will be making the short trip across the Gulf to Iran – illegal trade that nobody here want to flag up by labelling the cargo.

It is this vital trade route that is worrying Washington.

“In the past many illicit traffickers used the UAE and especially Dubai as a trans-shipment point for sensitive equipment and technology for Iran’s nuclear and missile programmes,” according to Bob Einhorn of the US State Department.

“But whilst there may continue to be a lot of illicit activity going on in the United Arab Emirates (UAE), authorities are making major efforts to ensure the UAE is not a conduit for illicit activities.”

Here in Dubai’s port area, the renewed clampdown by the US on trade with Iran is also hurting many legitimate, local businesses.

“We are being denied the chance to do business as we have done for the past 30 years,” says Morteza Masoumzadeh, an Iranian national who runs an export business in Dubai.

“Since the sanctions came on Iranian banks, other banks in the UAE also imposed restrictions on Iranian businesses.

“They will not open a letter of credit for us to ship goods from Japan to Bandar Abbas, for example. We have to pay by cash, but we cannot send $12m in cash to a supplier to ship goods for us. It’s just not practical.”

But despite the cost to business, the United Arab Emirates says it will strictly enforce the sanctions.

In practice it may not be that simple.

On the quayside where most of the boats load up, there is no security and just two small customs offices.

It means there is no way of knowing what is in the boxes.

That makes it much easier for firms to evade the rules and cash in on the black market.

“There’s always going to be someone saying, ‘well I’ve stopped, but others have not’,” says Riad Kahwaji, chief executive of regional security firm Inegma.

“Iran is always trying to think of creative ways to keep the ties with its old trading partners and see what other means there are to beat the system.”

But the pressure is now mounting on Dubai to punish firms that ignore the sanctions.

In the past it has been reluctant to impose tough penalties, largely because it too profits from the trade.

But Dubai is also a major trading partner with the US and Europe, both of whom want to see tougher sanctions on Iran.

“The UAE is a big trade partner with the US and the EU, so if they lose it on this side they get it compensated on the other side,” says Abdulaziz O. Sagar, chairman of the Gulf Research Centre.

“The UAE is one of the top five trade partners for the United States because it is an import-export hub.

“And because of the size of UAE investments in Europe and the USA, that would overshadow any losses with Iran.”

Until now, Tehran’s isolation has been good to them.

The re-export market here has flourished.

But as sanctions take hold and trade ties are cut, many of the boats that make their trade on Dubai creek could soon be lying idle.

Iran president says he would welcome a travel ban