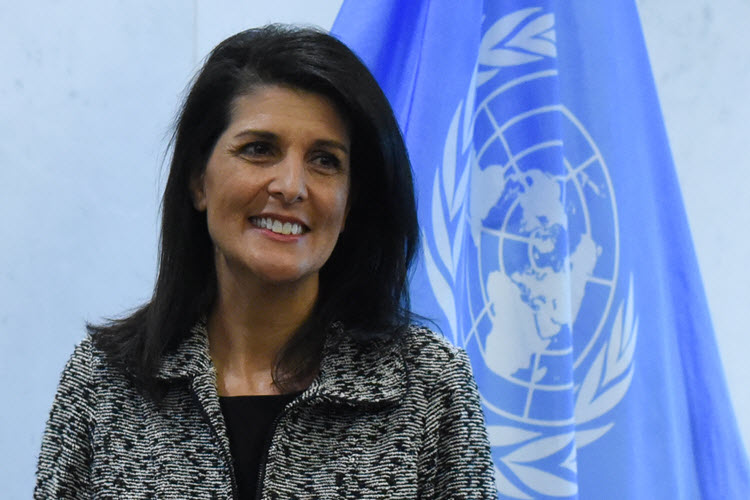 London, 10 Apr – The US Ambassador to the United Nations Nikki Haley said that nothing was off the table when it came to sanctions on Russia and Iran.

She told CNN’s State of the Union anchor Jake Tapper: “We’re calling (Russia and Iran) out. But I don’t think anything is off the table at this point. I think what you’re going to see is strong leadership. You’re going to continue to see the United States act when we need to act.”

Her comments came shortly after Senate Majority Leader Mitch McConnell told the politicians that he would look into stepping up sanctions on countries which supported Syrian President Bashar al-Assad, who is responsible for the chemical attack which left 100 dead in Syria last week.

In response to the chemical attack, the US dropped a bomb on the Syrian air base from which the bomb originated.

While Russia has denied Assad’s involvement in the chemical attack, Hayley said that the US does have evidence, which they saw in meetings last week.

She reiterated her warning at the UN the day after the US strike.

Secretary of State Rex Tillerson, is due to visit Moscow this week to meet with his Russian counterparts and plans to ask them about their commitment to ensuring Syria has no chemical weapons.

He told ABC’s George Stephanopoulos on This Week: “[I will] call upon Foreign Minister [Sergey] Lavrov and the Russian government to fulfil the obligation it made to the international community when it agreed to be the guarantor of the elimination of the chemical weapons. And why Russia has not been able to achieve that is unclear to me. I don’t draw conclusions of complicity at all, but clearly, they’ve been incompetent and perhaps they’ve just simply been out-maneuvered by the Syrians.”

Haley said: “So [the Russians] now have to answer for this. How can they with a straight face cover for Assad, because if they’re covering for Assad, then what are they really saying? They’re saying by covering for Assad that they knew that it was there, or they were incompetent by having chemical weapons there in the first place.”

Massachusetts Democratic Sen. Ed Markey rebuked Haley’s call for regime change, arguing that it would put US troops into another war in the Middle East.

He said: “When the Drumpf administration uses the words regime change, they are talking about a military effort to remove Assad. And that would mean putting American young men and women on the ground in battlefield conditions in order to accomplish that goal. I don’t think there’s any appetite in the United States for a massive additional military presence.”

He said: “Well this is part of the problem in Syria, is Russia’s sponsorship of this murderous regime. And so, we would want to appeal rationally to Russia — this is a great opportunity for the Russia leadership to re-evaluate what they’re doing. Why they’re supporting a regime that commits mass murder against its own people.”

Neither Russia nor Assad’s other ally, the Iranian Regime, appear to be re-evaluating, however.

Representatives from both countries made a joint stamen on Syrian state television, which said: “We will respond strongly to any aggression on Syria…Russia and Iran will not allow America to dominate the world.”

The Kremlin has also issued a statement on the discussion between Russian President Vladimir Putin and Iranian President Hassan Rouhani about the situation in Syria. In it, they claimed that the US strike violated international law and called for an objective investigation into the chemical strike to determine the perpetrator.

The countries are bluffing to the international community, expecting that the Syrian crimes against humanity, much like Russian crimes and Iranian crimes, will never be brought before the International Criminal Court (ICC).

Sunday Telegraph: Hardliners in the Iranian regime have warned...