Reuters: Iran has delayed phasing out gasoline subsidies in what analysts say may be a sign of President Mahmoud Ahmadinejad’s anxiety to avoid igniting a popular backlash. 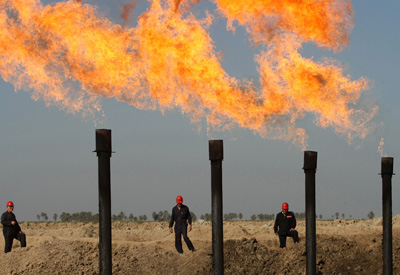 TEHRAN, Sept 16 (Reuters) – Iran has delayed phasing out gasoline subsidies in what analysts say may be a sign of President Mahmoud Ahmadinejad’s anxiety to avoid igniting a popular backlash.

Touted as “the biggest economic plan in the past 50 years”, the gradual elimination of the $100 billion the state pays to keep down the price of essential goods, had been due to start in the second half of the Iranian year, which begins next Friday.

But a senior official said petrol pump prices would continue to be kept low by massive state subsidies for at least another month.

With the economy subject to what one senior politician called the toughest sanctions Iran has ever experienced, analysts say the government may be getting cold feet about the radical plan, which will inevitably push up consumer prices.

Ahmadinejad hopes eventually to divert some of the money the state spends to keep down the price of food and fuel into direct payments for poorer families.

“People’s lives will improve from the very beginning,” Ahmadinejad has said, dismissing as scaremongering the notion that removing subsidies on vital goods will cause strife.

But the risks are great. People rioted when the government started rationing subsidised petrol in 2007 and some analysts have said big price hikes could reignite unrest which flared after Ahmadinejad’s disputed re-election last year.

After the June 2009 vote, Ahmadinejad faced down the worst street unrest since the 1979 Islamic revolution. The government said the ballot was fair and accused foreign powers of stoking “sedition”.

The subsidy phase-out — already delayed for six months due to disagreements between Ahmadinejad and parliament — was due to start on Sept. 23, but a senior official said that deadline would be missed by at least a month.

“The (gasoline) ration will not change for this month,” Mohammad Royanian, head of Iran’s Transportation and Fuel Management Office, was quoted as saying by Donya-ye Eqtesad newspaper on Thursday. No reason was given.

“The exact and definite date will only be announced by the president. From now on, gasoline rationing will be announced monthly,” Royanian said.

The government has been vague about the timing and severity of price rises and about the hardship payments aimed to help the poor afford essentials like petrol, cooking gas and electricity.

Economists have warned of a psychological impact on inflation as consumers anticipate future price rises.

“This ambiguity about the different aspects of this law means the market and families do not know how to adjust their (spending) behaviour for the coming months,” Mardomsalari daily said in an editorial, urging the government to get on with the reforms quickly in order to clear the uncertainty.

Iran announced on Sept. 7 it had achieved a massive increase in its refining capacity and no longer needed to import 20 million litres of its 64-million-litre daily consumption, something traders said they doubted was possible.

Under the rationing scheme introduced in 2007, a motorist can buy 60 litres of subsidised fuel per month for just 1,000 rials per litre (around $0.11). Beyond that amount they have to pay a “semi-subsidised” price of 4,000 rials.

Scott Lucas, a specialist in U.S.-Iran relations at Britain’s Birmingham University, said: “The fact is that gasoline is one of those visible areas. If price rises lead to demonstrations, it’s usually over gas or food.”

The official inflation rate has been steadily falling in the run-up to the subsidy phase-out, hitting a 25-year low of 8.8 percent a year in August, but a senior cleric recently voiced many Iranians’ concern about the veracity of the statistics.

“Constantly, figures are presented about the reduction of inflation, but this contrasts with what people see with their own eyes,” Grand Ayatollah Naser Makarem Shirazi said. (Additional reporting by Ramin Mostafavi, editing by Paul Taylor)

By Jubin Katiraie On the sidelines of an unprecedented...