Reuters: Wary that Chinese oil companies could be undermining new U.S. sanctions against Iran, the chairman of the House Foreign Affairs Committee said he would push the Obama administration to investigate.

By Tom Doggett and Susan Cornwell 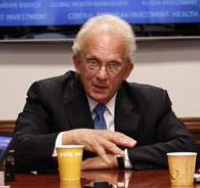 WASHINGTON (Reuters) – Wary that Chinese oil companies could be undermining new U.S. sanctions against Iran, the chairman of the House Foreign Affairs Committee said he would push the Obama administration to investigate.

To try to get Iran to drop its nuclear work, the U.S. Congress passed sanctions that were signed into law in July targeting financial services and Iran’s energy sector, hitting Iran’s ability to import gasoline and secure foreign investment.

Representative Howard Berman told the Reuters Washington Summit on Monday that he and the top Republican on the foreign affairs committee, Ileana Ros-Lehtinen, will meet administration officials soon over concerns foreign oil companies, some of which have U.S. subsidiaries, are violating the new law.

“China is first and foremost on my mind here,” said Berman, one of the authors of the sanctions law, of potential violators.

In addition to the U.S. measures, new sanctions have been imposed on Iran by the United Nations and the European Union this year to try and force Tehran to halt sensitive nuclear work the West suspects is aimed at bomb-making.

Iran says its nuclear program is for peaceful purposes, primarily to generate electricity.

The U.S. Treasury Department said Iran was smarting from the new sanctions. Iran’s leadership had been caught off guard as pressure on its economy and banking sector mounted, said Stuart Levey, undersecretary for terrorism and financial intelligence.

Levey, speaking at the Center for Strategic and International Studies, said Iran was effectively unable to access financial services from reputable international banks and “is increasingly unable to conduct major transactions in dollars or euros.”

Berman told Reuters, however, that he did not know in the long run whether the measures would disabuse Iran of its nuclear ambitions. “I don’t know that this is going to be successful.”

He said other sanctions which could be targeted at countries, instead of merely companies, doing business with Iran, were already being discussed in the United States if the latest measures do not have their intended effect.

NERVOUS ABOUT POSSIBLE “BACKFILLING” BY CHINA

Berman would not name Chinese companies that might be in violation of the law, but he said some had U.S. subsidiaries.

“The thing we’ve always been nervous about was the extent to which there would be backfilling by, particularly China … At least as far as I know as of right now, I don’t see much evidence that they have really jumped into the breach yet.”

It would be easier for Washington to impose sanctions on Chinese companies that have units in the United States.

“I’m unaware of specific actions the Chinese have taken since we passed this that are sanctionable, but that doesn’t mean it hasn’t taken place, I’m just unaware of it. That’s what I want to find out about,” Berman said.

While Iran has the world’s third biggest proven oil reserves, it must import 30 percent of its gasoline to meet domestic demand because of a lack of refining capacity.

Berman said he realizes some companies may still find back channels to trade with the country.

“I think what this really does is make the price of doing almost anything they want much more expensive, but I don’t think it’s hermetically sealed,” he said.

President Barack Obama said on Monday that Iran having a nuclear weapon would be a “real problem.” But he said did not think military action by Israel or the United States was the “ideal way” to solve the crisis.

The White House said Obama would use a speech at the United Nations this week to tell Iran the “door is open” to better relations with the international community, if it can demonstrate the peaceful intent of its nuclear program.

Berman said that if the United States ended up deciding to use force, or allowing the use of force against Iran, it would first need to have tried everything else, including engagement, to build international support.

Israel, believed to be the only nuclear-armed country in the Middle East, regards Iran’s nuclear program as a threat to its existence and has not ruled out military action to prevent Iran from building an atomic bomb. Pentagon chief Robert Gates has made clear that force would be the option of last resort against Iran should sanctions and diplomacy fail.

U.S. and Iraqi interests may work against pullout

Oil dips toward $106 after Iran gets new president

AP: The price of crude fell Tuesday as the...