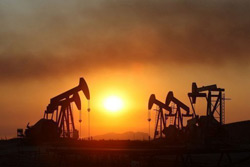 The Islamic Republic, the world’s fourth-largest oil producer, has been hit by international sanctions over its disputed nuclear work, which the United States and its allies fear is a cover to build bombs. Iran denies this.

Many Western companies, with the necessary expertise and capital to develop Iran’s energy sector, have suspended their activities in the country because of sanctions.

Iranian authorities have dismissed any impact of sanctions on the economy. “We will not sit idle in protracted negotiations with foreign companies,” said Deputy Oil Minister Mohsen Khojasteh Mehr, the Jam-e Jam website reported.

Khojasteh Mehr said the master development plan for the joint fields had been completed and the speedy development of them was the priority of the oil ministry, displaying Iran’s concern on falling behind in joint fields.

The official said drilling of Azar field, called Badrah in Iraq will begin soon. The field is near Iraq’s border with Iran.

Norway’s Norsk Hydro and Lukoil worked together on an exploration contract for the Azar field and discovered oil there in 2005. The companies later said the field holds 2 billion barrels of oil and according to an Iranian oil official it could produce up to 55,000 barrels per day (bpd).

Iran, which is 40 percent dependent on oil income, needs around $25 billion of foreign investment annually to develop its oil and gas industry. (Writing by Ramin Mostafavi; editing by James Jukwey)