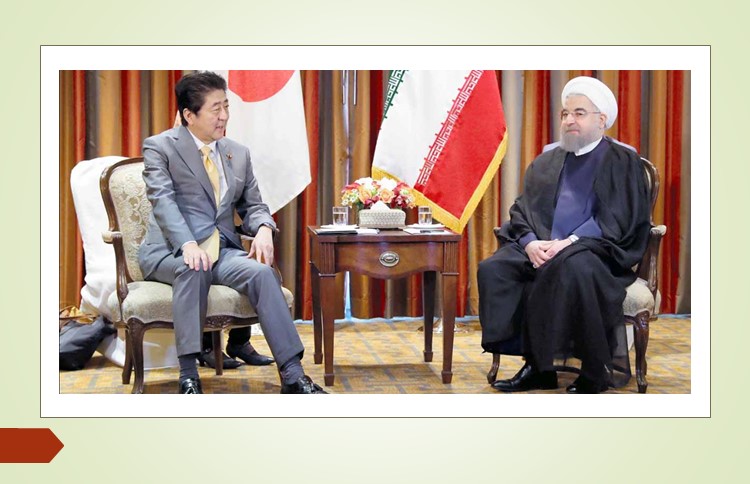 As President Hassan Rouhani was concluding his two-day visit to Japan, international media gave little indication that his meeting with Prime Minister Shinzo Abe had yielded any significant developments.

Abe did, however, use the occasion as an opportunity to affirm his government’s serious concern about Iran’s repeated and ongoing violations of a 2015 nuclear agreement.

Japan has earned a reputation in recent months for working to build diplomatic bridges between Tehran and Washington, amidst steadily escalating tensions. But Abe’s decision to condemn Iran, however lightly, during Rouhani’s visit suggests that Japanese policy may be trending in the same direction as European policy when it comes to Iran. Although many allies of the US have defended Iran’s position since the US pulled out of the nuclear deal in May 2018, the persistence of Iran’s malign behavior has inspired those same allies to step up their pressure on Tehran.

In many cases, this pressure has merely consisted of diplomatic pronouncements with few credible threats behind them. But it has been enough to convince some expert commentators that there is growing international support for the American strategy of “maximum pressure.” That strategy, expressed primarily through an ever-escalating roster of economic sanctions, is aimed at securing concessions in a dozen key areas of Iranian government’s activity, including nuclear program but also violence and support for terrorism in the broader Middle East.

Rouhani’s visit to Tokyo comes just over six months after Shinzo Abe visited Tehran and urged greater dialogue between Iran’s Western ally and its erstwhile Persian Gulf trading partner. Japan had long been a major buyer of Iranian oil, but its loadings ceased in May when the US withdrew sanctions waivers that had allowed certain nations to continue buying petroleum from the Iranian government as long as the volume of those purchases continued to trend down.

Despite the potential for Abe’s visit to yield international goodwill for the Iranian government, the June meeting coincided with an incident in the Gulf of Oman in which Iranian mines apparently damaged a Japanese tanker, the Kokuka Courageous. Another tanker was also damaged on the same day, and both attacks were credibly attributed to the Islamic Revolutionary Guard Corps. Additionally, these were preceded earlier in the summer by acts of sabotage against three ships at anchor off the coast of the United Arab Emirates.

The attack on the Kokuka Courageous was widely cited as a further reason to avoid taking Iranian officials seriously as partners in high-profile diplomatic discussions. Yet Rouhani’s visit to Tokyo on Friday demonstrated that the Iranian government is unwilling to concede the point and remains committed to exploiting a longstanding pattern of neglect for Iran’s recurring violations of the public trust.

One of the major opposition movements, the National Council of Resistance of Iran, has decried this pattern as the basis for policies of “appeasement,” which it blames for a weak Iran nuclear deal, as well as a lack of multilateral action to address Iran’s history of human rights abuses, including its ongoing crackdown on nationwide protests that broke out in mid-November in response to the announcement of a sharp increase in government-set gasoline prices.

Those protests underscore the potential importance of Rouhani’s outreach to Japan. And that, in turn, suggests that the Iranian government will be coping with substantial frustration in the wake of Rouhani’s failure to obtain meaningful commitments from his Japanese counterpart. Just as the intended purpose of the November gas price hike was to offset the effects of US sanctions, the outreach to Japan was also intended as a major step in the regime’s strategy of developing closer ties with Asian countries that are supposedly less subject to less direct influence by Iran’s American “enemies.” Yet, political analysts say Rouhani’s trip to Japan was intended to somehow open dialogue with the U.S.

Since sanctions waivers for Japan, India, and others were lifted in May, Iran’s crucial oil exports have reportedly declined to as little as a quarter of a million barrels per day on average. While the 2015 nuclear deal was still in full effect, these exports peaked at nearly two and a half million barrels per day. The precipitous decline has naturally overlapped with trends of extreme inflation and negative growth. The IMF predicted that Iran’s economy would contract nearly 10 percent during the current year and remain roughly flat in the year ahead.

Iranian officials have overwhelmingly remained defiant even in the fact of these indicators. And Tuesday’s speech made it clear once again that Rouhani was among them. Furthermore, that speech was preceded, on December 8, by his announcement of a new national budget, a supposed tool of “resistance against US sanctions.” But the apparent failure of his outreach to Japan could spell trouble for a budget that is not entirely transparent about its expenditures and relies on income from public companies more than government funds, by a margin of nearly two-to-one.

The Iranian government’s budget for the upcoming year will be generated through taxes and fees for government services.

As that economic plan goes into effect, the Iranian regime likely faces renewed risks of popular unrest, even as it struggles to fully rein in protests that have now gone on for five weeks, resulting in an estimated 1,500 deaths. And in the face of that threat, Tehran will no doubt find itself under tremendous pressure to somehow either complete its pivot to Asia or reopen Western export markets.

But in light of Prime Minister Abe’s reaction to Rouhani’s visit, it appears as if either move would require Tehran to first resume compliance with the nuclear deal, and perhaps also make other concessions besides. So far, though, there has been no sign of the regime’s willingness to take either step. In fact, on Wednesday Foreign Ministry spokesman Abbas Araqchi reiterated that Tehran is not considering talks with Washington “at any level” and does not intend to compromise its position on the nuclear deal or any other matter until the US has first lifted all the sanctions contributing to its economic collapse.