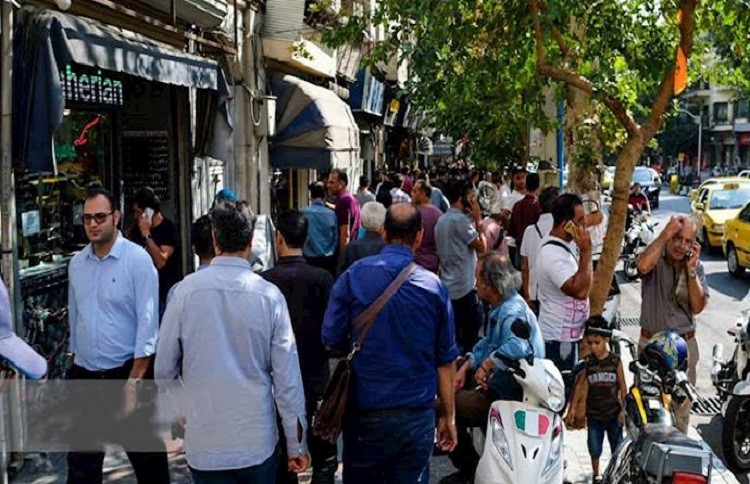 The news of the influx of poor people in Iran to sell their latest savings, such as gold and jewelry, to goldsmiths is sad and unfortunate.

These assets, which are sometimes memorable for their owners, when they are taken out of a safe and inaccessible place to provide food for the family or to pay the treatment of the coronavirus infection, or to pay back the rent, is indicative of the severe poverty that the Iranian regime has imposed to the people.

After enumerating the regime’s negligence in dealing with the coronavirus, including preventing the clerics of Qom from quarantining the city and spreading the coronavirus to all parts of the country, which led to the deaths of thousands, the state-run newspaper Arman wrote about the consequences of the collapse of the economy:

“Many guilds and stratums, especially the workers, lost their jobs. Workers, who may not be able to save for a week due to the gap between the high costs and their incomes, have been forced to continue their livelihoods for the past two months without a job or income.” (Aftab, 27 April)

This newspaper notes that during the Corona era, people were forced to spend all their ‘savings’ and now turn to ‘selling their assets’ and wrote:

“In addition to being at odds with the dangerous social divide, this is a sign of the people’s difficult livelihood these days. People who were quarantined for a while and now face a new wave of high prices under the pretext of Corona.”

But these days in Iran this event is not anymore limited to the poor people, even people who had good financial power are now affected and forced to sell their reserves for the minimum livelihood.

Selling home gold, from earning a living to paying off debts

Regarding the reason for the influx of people, the head of the Tehran Jewelry Association said:

“These days, the lower stratum to earn a living, and the upper stratum is selling gold to pass checks and pay off debts are selling their golds. According to Mohammad Keshti-Arai, due to the lack of sales from gold shops and lack of liquidity, there are sometimes consultations. (Arman, 27 April)

While the regime is crying out daily about the loan of one million tomans, but according to Aftab news (27 April), “Subsidies takers believe that this amount will not cure their livelihoods … Although a significant number of those targeted by the subsidy scheme have not yet succeeded in obtaining the government-sponsored loan.”

The reason is clear: over the past year, especially after Corona’s arrival in Iran, costs, and in fact inflation of goods, especially foodstuffs, have risen so much that they are now comparable to the 50% rise in inflation in Rafsanjani’s era.

The influx of poverty and hunger to cities like Tehran is far more painful and widespread, “In this regard, the Economist Intelligence Unit has published the 70th annual report on the cost of living, according to which the capital of Iran has become the 106th most expensive city in the world increased by 14 ranks.” (Eqtesad Online, 26 April)

Another trap to plunder whatever is left for the people

These days, the regime is using another alibi called the capital market, or the so-called stock market, the goal of which is pursued by the regime’s monetary and financial institutions, such as the central bank. The project is designed to collect more and more liquidity and capital in the hands of the people so that the regime can compensate part of its deficits and debts and the losses of the affiliated enterprises with the above-mentioned liquidity.

The plan comes amid rising stock market profits at a time when even the regime’s government is acknowledging a deep slump in production.

Although this deception has been exposed in some independent media and of Iran’s resistance and international economic bodies, the poor living conditions of some of the people who have a little wealth have caused them to fall into this trap. So much so that some people have turned to sell gold and ornaments to attend the stock market.

Aftab daily wrote on 27 April: “The People’s welcome of selling gold and other assets cannot be just studied from one aspect. Naturally, a group of people who have witnessed the rapid growth of the stock market in recent weeks is feeling behind others these days. Those who have previously sought to preserve the value of their capital by buying gold, currency, or coins (gold) are looking for a way to benefit from the high return on the capital market. Therefore, it seems that they are going to turn everything they have in their pockets into stock exchanges.

According to a group of experts, this daily called the people’s behavior “emotional” and described the current state of the capital market as similar to “experiences such as investing in pyramid companies, welcoming financial and credit institutions and invading the foreign exchange market in 2017.” And added, “They are not very optimistic about the fate of liquidity in the stock market.”

Add finally added: “Naturally, no expert denies the gap between costs and inflation with people’s incomes. People who lose the value of their capital and assets more and more every day due to the unbridled growth of inflation have no choice but to test their chances in a market every time.

“Especially in the days when Corona has destroyed many businesses and works, different stratums are looking for a way to increase their capital. While government grants do not cover their livelihoods, they certainly resort to other means, such as selling their assets, which sometimes have a memorable aspect and spiritual value.”

In the field of political economy, the best-selling book “Why Nations Fail: The Origins of Power, Prosperity, and Poverty” from two famous economists Daron Acemoglu and James A. Robinson which has attracted many readers who are looking for the causes of the backwardness and gloominess of human societies, in the introduction (Persian version), written by one of the Iranian’s regime officials, Ahmad Midri (Deputy Minister of Cooperatives, Labor and Social Welfare), there is a thought-provoking confession:

AFP: US Secretary of State Condoleezza Rice on Saturday...