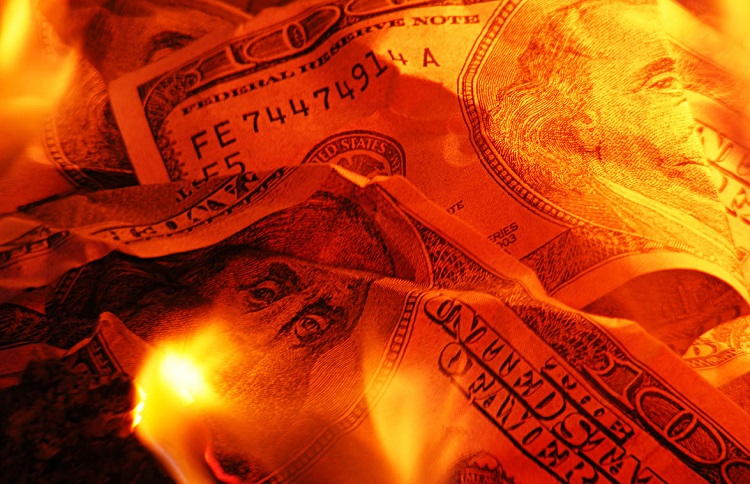 The foreign exchange market, gold, coins, and stocks have become short-term stay for cash flows in Iran. Money as if no one wants to keep it, and most prefer to own all sorts of liquid assets instead.

Economists say that people usually try to turn money into another asset during periods of inflation and inflationary expectations, so part of the money that is transferred to different markets is hot money.

Imagine an economy where inflation is high and rising. In such an economy, the value of the national currency is declining day by day, and people are doing everything they can to escape the money whose purchasing power is declining rapidly. In such a situation, people bring their money into different markets to maintain its value.

In the economic lexicon, this phenomenon is called ‘hot money’. In fact, in an inflationary environment, money is like a hot object that no one wants to hold in their hands, and they try to turn that burning money, whose worth is vaporized, into another asset. These currencies enter various markets over a short period of time with the motive of making a profit and preventing devaluation.

Hot money is not just about the domestic economy of a particular country. In fact, this phenomenon also exists in the international economy. If the interest rate in one country increases compared to other countries, depositing in it becomes more attractive.

In a situation where there is the possibility of free movement of financial resources, people in other countries prefer to buy the currency of a country that pays more bank interest and deposit it in the banks of that country. If we talk about the world economy and international finance, this increase in demand for currency is called the heating of the money market. Of course, interest rates are not the only reason for this, and other economic variables, as well as political conditions, influence the movement of hot money among other countries.

Where does the burning Toman go?

Some changes in recent months in different markets of the country have led to the possibility of hot money in Iran. In fact, if we look at the warming of money in the domestic economy, we must consider the relationship between inflation, and the demand for cash and other assets.

As inflation expectations in society increase, the demand for money decreases, and investment in various markets reduces cash in the hands of individuals and instead increases their asset basket. This is the hot money that quickly turns from cash into a profitable asset in the short term.

In the Iranian economy, although there is no news of several hundred percent hyperinflations, the high inflation rate, which similar to isn’t seen in other countries, has caused the rial or Toman to enter a market each time and cause inflammation in the short term.

Dollars, gold, coins, stocks, and cars are the markets that faced the short-term entry of these currencies. Economists say hot money, is the money that people want to get rid of. Does the confusion of Tomans in different markets mean that it is hot?

People usually try to turn money into another asset during inflation and inflationary expectations. Therefore, part of the money that is transferred to different markets is hot money. In fact, hot money is money that wants to maintain its purchasing power in the face of inflation.

The other part of this money transfer is related to the recession. In fact, some markets were declining in yield, while others were booming and could be profitable in the short term. For example, some people entered the stock market during the holidays to maintain the value of their cash.

Now, with the news of car registration, they take out their money and get ready to buy a car. Also, some of the people who owned foreign currency converted it into Rials and entered one of the profitable markets in the short term. In any case, such shifts reflect an unhealthy economy. These moves disrupt markets and confuse economic actors.

Experiences similar to the current situation in Iran are usually very rare in other economies of the world. In developed countries, the economy operates in such a way that it is not at a similar stage to the current state of the Iranian economy.

The experience of high inflation rates has come to an end in most countries, and in addition, markets are acting differently. In other countries, for example, a car is not considered a capital good with complex purchasing processes such as a queue. In most countries, the car is sold to consumers with immediate delivery and with good conditions and facilities. In fact, their problem is not that supply does not meet demand, rather, supply is ahead of demand, and it is the demand stimulus policies and sales methods that maintain market dynamism.

White-Collar Criminals in Power in Iran

ANALYSIS – Iran’s shift on IAEA may offer ‘insurance’ if bombed