Reuters: Like many of his peers, the 35-year-old laborer was devout and lived at home with his mother. But his life changed when he started a blog called “My Life for Iran” last year. 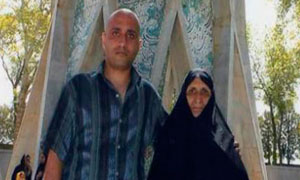 BEIRUT (Reuters) – There was little about Sattar Beheshti that made him stand out in a working-class suburb south of Tehran called Robat Karim.

Like many of his peers, the 35-year-old laborer was devout and lived at home with his mother. But his life changed when he started a blog called “My Life for Iran” last year.

His entries often focused on the struggles of the working class as well as the political restrictions in Iran, sometimes mixed with personal anecdotes from Beheshti’s daily life.

As months passed, the tone on the blog became sharper and more political, with unveiled criticism of the establishment and even the Supreme Leader, a red line in the Islamic Republic.

In one recent post, Beheshti criticized a speech made by the leader, Ayatollah Ali Khamenei, at a meeting of the Non-Aligned Movement in Tehran with the title “You presented a bunch of lies instead of a speech” superimposed over a picture of the cleric.

Other posts faulted Iran’s unwavering support for Hezbollah in Lebanon or highlighted the plight of human rights activists.

“Yesterday they threatened me and told me your mother will soon be wearing black,” Beheshti wrote in a post on October 29.

The next day security agents from Iran’s cyber police, known by the acronym FATA, arrested him. His bruised and battered body was handed to his family a week later, his death the result of torture, according to a smuggled letter from fellow prisoners.

The backlash was swift and furious, especially from other bloggers, even pro-government ones, disturbed at the fate of a pious young man with no known history of political activism.

Their most pointed criticism was directed at the cyber police and their campaign to stop any attempt at a “velvet revolution” in the Islamic Republic through the Internet.

Government officials have not denied the abuse.

“This individual was beaten but this beating was not in a manner that would result in his death,” Attorney-General Gholam Hossein Mohseni-Ejehi told a news conference on December 3.

Within a month of Beheshti’s death, seven policemen were arrested and the head of the cyber police was ousted, a dramatic turn of events in a divisive scandal that has shocked Iran.

As international pressure mounts over Iran’s disputed nuclear program and harsh economic sanctions bite, the leadership is wary of domestic turmoil, especially with a potentially turbulent presidential election due in June.

Beheshti’s death exposed Iran’s political fissures as a handful of lawmakers badgered President Mahmoud Ahmadinejad’s government and the judiciary into ordering an inquiry.

But the most effective tool in publicizing Beheshti’s unusual death was the one he had chosen – the Internet.

“I really do believe this is one of the great examples of the impact of the Internet in Iran,” said Mahmood Enayat, director of the Iran Media program at the University of Pennsylvania and the founder of Small Media, a non-profit group that focuses on improving information flows in closed societies.

The Internet had become a watchdog, forcing the government to react to anything gathering enough attention, he argued.

“They can’t just ignore it anymore.”

Although many of the details of Beheshti’s detention and death are murky, some are no longer in dispute. On the night of October 30, he was arrested at his home in Robat Karim and transferred to section 350 of Tehran’s notorious Evin prison.

Fellow prisoners there said he was hung from the ceiling of a cell and beaten. His arms and legs were then tied to a chair and he was beaten again. At times, his interrogators threw him on the ground and kicked him in the head and neck.

A group of political prisoners talked to Beheshti while he was detained, and slipped out a letter based on their observations and his account to opposition activists.

“When they brought Sattar to section 350, the marks of torture were visible on all parts of his body,” said the letter signed by 41 prisoners and published on opposition websites.

Despite his injuries, Beheshti filed a complaint about his treatment to prison officials. Shortly before he was transferred to another detention facility, Beheshti told his fellow prisoners that his captors intended to kill him. Four days later, authorities informed his family that he was dead.

After Beheshti’s death, security forces warned his family not to talk to media outlets, and security agents threatened to arrest Beheshti’s sister if the family did not sign a consent form regarding the circumstances of his death, his mother said in an interview with the Persian service of German radio Deutsche Welle.

The family was also offered diye, or blood money, but Beheshti’s mother, Gohar Eshqi, refused. When the family was allowed to see Beheshti’s body, they noticed that blood from his knee and head had stained the burial shroud.

“They killed him and handed me back his body,” Eshqi said in an interview with the pro-opposition Saham News website.

On December 13, a small crowd of friends, neighbors and family gathered to commemorate the fortieth day after Beheshti’s death at his gravesite. The previous day security agents tore up notices about the ceremony in the neighborhood, Beheshti’s sister Sahar told Kalame, another opposition website.

Videos of the event posted online show Eshqi, Beheshti’s mother, holding his picture and shouting “I’m proud of my son” and “My son’s killers must be executed.” Police later attacked the crowd and beat Eshqi, wounding her leg, Sahar said.

Few Iranians could have predicted that Beheshti’s death would make any waves. But the Internet buzz kept building. Websites linked with the opposition Green Movement took up the cause and published details of his detention and physical abuse. That led even conservative bloggers to speak out, concerned that the case would damage the image of the Islamic Republic.

The cyber police, a unit within the Iranian police force, was created in January 2011 with a relatively broad mandate.

While the Revolutionary Guards and Intelligence Ministry do their own web surveillance, the cyber police are mainly responsible for tracking down dissidents online.

They are also responsible for blocking websites with controversial content and for pursuing cases of web sabotage.

But in Beheshti’s case, little sophisticated surveillance was necessary – he was blogging openly under his own name.

OUTRAGE AT HOME AND ABROAD

The affair has drawn international attention, with the United Nations, the United States and several other countries calling for an impartial investigation into Beheshti’s death.

“Foreign governments have raised an uproar about this issue. Why don’t the foreign ministry and the judiciary explain the issue?” Ahmad Tavakoli, a parliamentarian from Tehran and one of Ahmadinejad’s foremost opponents, said on November 11.

“A death has happened and there must be an explanation.”

The outcry about Beheshti in Iran’s majles, or parliament, may be linked partly to next year’s presidential election.

A disputed 2009 election, in which Ahmadinejad was declared the winner, led to widespread violence and a loss of faith in the political system among some voters.

Shining a spotlight on Beheshti’s death is an opportunity to restore confidence in the system and reassure Iranians that the government operates in a transparent and just fashion.

Hadi Ghaemi, director of the International Campaign for Human Rights in Iran, said the authorities were sensitive about their domestic image. “They want to say: ‘Yes, we have a working system,’ to say: ‘Look, one bad apple committed a crime and we are going to make sure whoever is responsible is going to pay.'”

No clarity has yet emerged.

On November 12, the committee for national security and foreign affairs in the majles held a hearing on Beheshti’s death with members of the national police force present. At the end of the session, the head of the committee, Alaeddin Borujerdi, said the evidence showed no marks of abuse or torture on Beheshti’s body.

Only a few hours later on the same day, Mohseni-Ejehi, the attorney-general, announced that the official medical examiner had noted bruises in five places on Beheshti’s body.

The shockwaves from his death rumble on.

After the dismissal of the cyber police chief, Mohammad Hassan Shokrian, on December 1, many hardliners complained that the regime had caved to pressure from the media and foreigners.

Ghaemi said ordinary Iranians who fell foul of the security services risked much harsher treatment than those with some name recognition, but that Beheshti’s case marked a milestone.

“It has become a very important issue in terms of discourse between members of parliament, the political class and the judiciary,” he said.

“It shows to me that the culture of human rights is really taking root in Iran – that they can’t cover it up and run away like they did before.”

Bloomberg: Iran will pare handouts to millions of citizens in...