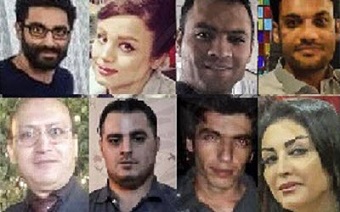 London, 19 Aug – Iranian authorities arrested a group of Iranian Christians at a house-church in the city of Isfahan, central Iran, last week.

A total of 11 Christians were arrested by armed plain clothes intelligence agents in the raid on August 12.

The National Council of Resistance of Iran (NCRI) have been able to identify ten of those arrested but an eleventh has still not been identified. However, there is no information about the current status of the detainees.

This is the latest incident in the regime’s suppression of Iran’s minority Christian population.

On Christmas Day 2015, a number of Iranian Christians were arrested in the city of Shiraz, southern Iran. Intelligence agents ransacked the house-church and confiscated personal items and satellite dishes

In the lead up to July’s ‘Free Iran’ rally, nearly 80 church leaders from the United Kingdom and the United States expressed deep concern over the suppression of Iranian Christians and urging the international community to condition relations with Iran on an improvement to human rights.

The bishops (including John Pritchard, former Bishop of Oxford; the Bishop of Stepney, Adrian Newman; the Bishop of Selby, John Thomson; and Rachel Treweek, the Bishop of Gloucester who is the Church of England’s first diocesan bishop) and priests reiterated that the suppression of Christians in Iran has increased during Hassan Rouhani’s tenure.

The letter from the religious leaders said: “Iran’s ruling theocracy is rightly a source of grave concern for human rights organizations and institutions with a particular interest in the protection of the rights of Christians. … Reports by the UN Secretary General, the UN Special Rapporteur on the situation of human rights in Iran, and the U.S. State Department all indicate that the repression of Christians has not only continued but intensified during the presidency of Hassan Rouhani.”

Tensions increase in the capital