The Papal Legate Calls for Investigation into 1988 Massacre in Iran 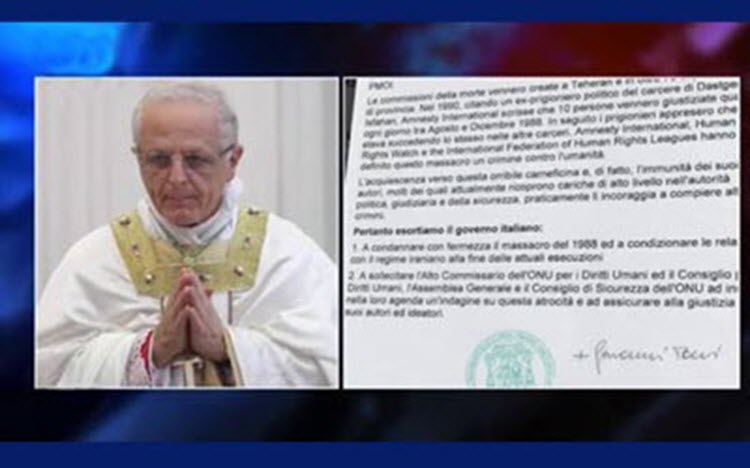 London, 1 November – On October 29 the National Council of Resistance of Iran (NCRI) published a statement by the Papal Legate and the Secretary of the Conferences in the Marche region of Italy. The statement speaks to the necessity of prosecuting the perpetrators of the Massacre in Iran in 1988.

The statement reads as follows:

“In recent weeks, the days coincide with the intensification of the arbitrary executions in Iran and at the same time, the new details about the Massacre of 30 thousand activists in 1988 have been disclosed and it has given the Iranians a shock.

“The released audio file of Ayatollah Montazeri, the Khomeini’s successor in a meeting with 4 judicial and intelligence officials discloses the shocking facts of the Massacre which is the second greatest massacre of the political prisoners after the World War II.
One of the 4 people, who were called as the Death Committee by the prisoners, is the current Minister of Justice, Mostafa Pourmohammadi; the second person is the current president of the court of judges and the third one was the former Attorney-General of Iran as well.

“The former Deputy Minister of Information in Iran’s regime acknowledged that 33700 people were executed in the Massacre of 1988.This massacre was carried out with Khomeini’s Fatwa in July 1988.

“Many of those executed have been sentenced to imprisonment previously and they have been serving their time or have already served. Lots of those executed were the prisoners who were to be released or they were the family members of the people of Mujahedin that Khomeini ordered to arrest them. In Tehran and provincial capitals and many cities (a total of more than 70 cities) the death delegations were formed.”

The international human rights organizations that have declared the Massacre of 1988 as a crime against the humanity were referenced by the young Archbishop. He says, “Silence against such terrible massacre and the impunity of the perpetrators, in fact, encourages them to continue their crime. These perpetrators currently own the highest political, security and judicial positions in the country.”

He continues: “At first, I ask the Italian government to condemn the Massacre of 1988 strongly and to conditionalize its relation with Iran to halting the executions. Secondly, I ask the High Commissioner for Human Rights Council, the UN General Assembly, and the Security Council to investigate these awful crimes and to bring the perpetrators and instigators of the Massacre to trial.”
The Mayor of Urbino, Italy, issued a statement as well, about the emphasis placed on complicity of the current officials of the clerical regime in the killing of 30 thousand activists in 1988, that was revealed upon the the release of the audio file.

“The massacre of 1988 was carried out with Khomeini’s Fatwa. In his Fatwa,he said that all those prisoners across the country who continue to support the People of Mujahedin will be condemned to death penalty.”