Another Protester Tortured to Death in Iran 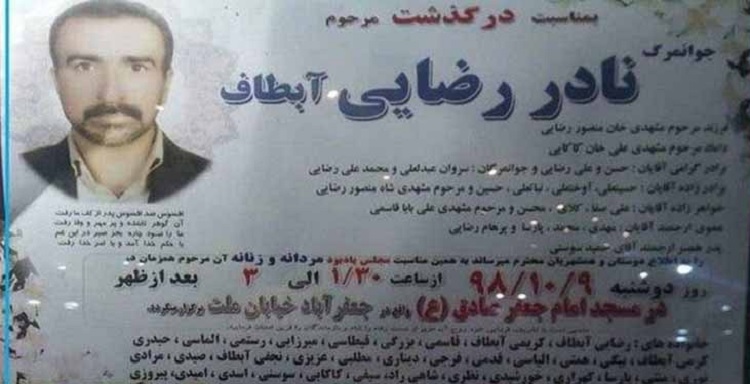 Another one of the men arrested during Iran’s nationwide anti-establishment protests in November was tortured to death, according to a Kurdish human rights group on Monday.

The man, identified as Nader Rezaei Abtaf, was arrested by security agents during the protests in the Jafar Abad district of Kermanshah on November 16. His family was not given any information about his whereabouts until his body was delivered to his family on December 29.

Three sources close to the family said that Rezaei died under torture in prison, but the report doesn’t give any further information.

Prior to this report, there were several other instances where arrested protesters were killed under torture.

A man, identified as Hashem Moradi, was arrested on November 17 while selling goods on the street, which indicates that he was not taking part in the protests but was arrested anyway. His tortured body, with feet, still shackled, was found in a river near Safi Abad Village in the western city of Javanrud on December 31, after an anonymous person rang the family and told them where his body could be found.

A source close to his family said that a fellow detainee had told the family that Moradi was kept in Dizel Abad Prison in Kermanshah for around 10 days before being moved to an unknown location. Prior to his body being found, Moradi’s family was told by the Intelligence Agency to issue a statement saying that he was mentally disabled and to ask the public to be on the lookout for him, which is obviously the government trying to cover their tracks.

The authorities then enforced heavy security measures around his funeral and threatened the family with severe punishment if they talked to anybody about the murder of their relative. Still, they risked this to get the truth out.

The government launched a brutal crackdown on the nationwide protests, which sprung up on November 16, after the government tripled fuel prices overnight. At least 1,500 protesters were killed, around 4,000 wounded and 12,000 arrested.

There are many more accounts from prisons across the country that detained protesters, including children, who have been subjected to torture, which includes sexual assault and rape. This was in order to force confessions, break the spirit of political prisoners, and intimidate other protesters into stopping. It has not worked. In this regard, it is necessary that the United Nations Security Council (UNSC) hold the Iranian authorities accountable and employ pressures to stop using violence against protesters.

G8 to Iran: end violence, reflect will of people