Reuters: Arab leaders at odds over supporting Islamists in upheavals across the Middle East have proved in no mood to reconcile at a summit this week, an outcome likely to satisfy Syria and Iran.

By Sylvia Westall and Amena Bakr 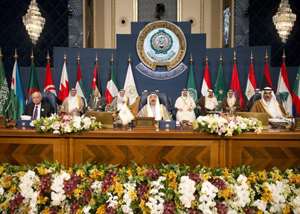 KUWAIT (Reuters) – Arab leaders at odds over supporting Islamists in upheavals across the Middle East have proved in no mood to reconcile at a summit this week, an outcome likely to satisfy Syria and Iran in their rivalry with regional heavyweights Egypt and Saudi Arabia.

Heads of state assembled in Kuwait publicly acknowledged they needed to end quarrels that are exacerbating an already catastrophic war in Syria as well as turmoil in Egypt and Iraq.

Behind the scenes tempers appeared too frayed for any possibility of joint Arab action against Syrian President Bashar al-Assad, or a common line on Tehran as it seeks detente with some Gulf neighbours and a thaw with the United States.

Saudi commentator Jamal Khashoggi told Reuters that Arab nations had never been as divided. He compared the use by some states of satellite TV stations to broadcast conflicting views to the Arab world with the past, when leaders such as of Egypt and Syria used radio propaganda to win regional influence.

“We’re back to ‘my radio is more powerful than your radio’. War across the airwaves. This country slanders the other. It’s very upsetting,” said Khashoggi.

States differed not only over the Syrian civil war but also the entire Arab Spring. Some saw the 2011 revolts against autocratic rule as negative for Arabs while others thought they marked “the true course of history”.

“Bashar al-Assad and Iran are benefiting from this division between the Gulf countries,” said Ebtisam al-Qitbi, a professor of political science at the Emirates University in the United Arab Emirates. She criticised a lack of consensus on supporting Assad’s political opponents. “There are no real steps to solve the Syrian crisis. The opposition felt they were alone at this summit,” he said.

Inter-Arab disputes that stem largely from Arab Spring have weakened leading Sunni Muslim states while Shi’ite rival Iran tries to improve its relations without the outside world. Tehran’s Arab ally Syria, embroiled in a sectarian war that has killed 140,000 people and displaced millions, also benefits from the lack of unity.

“Differences in approach to some of the thorniest issues in the reordering of the post-Arab Spring landscape are simply too great to paper over, at least for the moment,” said Kristian Coates Ulrichsen, a Gulf expert at the Baker Institute in the United States.

The disputes between states otherwise united in deploring Assad’s attempts to crush an uprising begun by unarmed civilians, add up to the most complex rift for a quarter of a century.

Arabs split into pro- and anti-Baghdad camps after Iraq’s 1990 invasion of Kuwait and subsequent ejection by a U.S.-led force, marking regional diplomacy for years afterwards. But the latest disputes involve political forces energised by the Arab Spring after decades of repression, and so may last longer.

At the Kuwait summit, a closing “declaration” contained a pledge to end divisions but there was no official final joint communique, reflecting an inability to agree common positions.

Crown Prince Salman, head of the Saudi delegation, left in hours. The United Arab Emirates sent the ruler of its Fujairah emirate, not its top representative, in what analysts said was a sign the UAE was not ready to discuss its differences.

Qatari Emir Sheikh Tamim bin Hamad al-Thani, whose country some in the Gulf regard as a reckless foreign policy maverick, signalled an unchanged view of the world. In his speech to the summit, he said the Arab Spring led to “hope for a better future” – a view diametrically opposed to most Gulf Arab states.

His phrase highlights one of the main quarrels dividing Arabs – Qatar’s support for the now outlawed Muslim Brotherhood in Egypt, a movement whose republican views and use of electoral politics are seen by the hereditary rulers of many Gulf states as a potent political menace.

Saudi Arabia, the UAE and Bahrain accuse Qatar of interfering in their internal affairs and earlier this month withdrew their ambassadors from Doha in protest. They are furious about Qatar’s refusal of their requests for an end to what they see as a stream of seditious pro-Brotherhood propaganda broadcast by Doha-based al Jazeera television.

The three governments are also alarmed by what they regard as Qatari meddling in Yemen. Qatar denies interfering anywhere but vows no change in its foreign policy, which appears to assume that Islamists are the future in Arab politics.

“The Saudis … wanted to be very firm with Qatar” at the summit, said a diplomat. “There are problems about the Brotherhood, the future of Egypt, Syria. Kuwait did all it could to have a consensus. But the Saudis are very firm.”

In the Syrian war, Riyadh and Doha both back Islamist groups fighting Assad’s forces, but they are rivals for influence in the political and armed wings of the opposition. In turn, Assad gets political support from Iraq and Algeria, weapons from old ally Russia, and military backing and advice from Iran.

Qitbi said that in a recent battle in Syria’s Yabroud town north of Damascus, the Qataris told Islamist groups which they fund to pull out of the fighting, apparently to irritate the Saudis. The area later fell to the Syrian army.

Other disputes involve accusations from Baghdad of Saudi and Qatari backing for Islamist insurgents in Iraq’s Anbar province. They deny the assertions.

Yet further differences exist over what many Gulf states regard as interference in their affairs by Iran, locked in a struggle for regional influence with Sunni rival Saudi Arabia.

Oman, and to a lesser extent Qatar, appear to view with equanimity Iran’s efforts to return to the international mainstream by allaying fears over its nuclear programme. Tehran says the work is peaceful but the West fears it is a cover for a bomb programme.

Saudi Arabia and Bahrain have accused Tehran of stoking subversion within their Shi’ite communities, and with the UAE they are uneasy about negotiations on ending the nuclear dispute between Tehran and world powers.

The summit host, Kuwaiti Emir Sheikh Sabah al-Ahmad al-Sabah, urged states to overcome the rifts he said were blocking Arab initiatives. “The dangers around us are enormous and we will not move towards joint Arab action without our unity and without casting aside our differences,” he said.

Qatar’s Tamim appeared to chide Iraqi Prime Minister Nuri al-Maliki, a Shi’te, for stigmatising the country’s Sunni minority which tends to see him as a pawn of Iran.

A few words later, Tamim appeared to have a message for Egypt, which has declared the Brotherhood – expelled from power last July by the army – as a terrorist organisation. Riyadh issued the same declaration on the Brotherhood this year.

Arabs should not attach the label of terrorism “to those who differ politically with us, because that would proliferate terrorism rather than isolating it,” he said.

Exclusive: Iran was behind Hezbollah-Israel war

Iran Keeps Students Illiterate and Teaches Them the Culture of Martyrdom