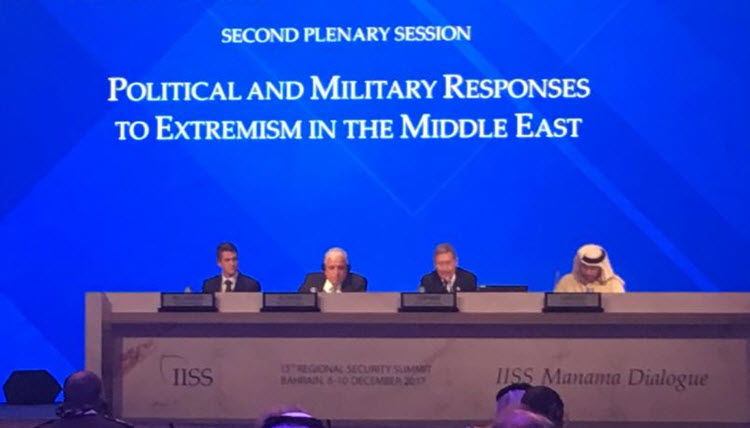 London, 11 Dec – An international security conference has reaffirmed the importance of tackling the Iran-backed Houthis in Yemen and all other Iranian forces who are supporting terrorism and destabilising the Middle East.

The Manama Dialogue 2017, held in Bahrain this weekend, brought together security and military experts to discuss the joint threats of extremism and terrorism.

Bahrain’s Minister of Foreign Affairs Sheikh Khalid bin Ahmed Al Khalifa explained that the stability and security of the region faced many challenges, especially with the support that terrorists receive from Iran.

He warned that the Iran undermines regional security, destabilises foreign countries, and supports terrorism to implement its own malign agenda.

UAE Minister of State Anwar Gargash said that Iran’s proxies are disrupting the region, citing the Houthis who recently assassinated former Yemeni President Ali Abdallah Saleh on the order of Iran in particular.

UK Secretary of Defence Gavin Williamson said that the UK would invest at least £10 million to strengthen counter-terrorism and stressed that terrorism must not only be fought on the ground but also by “shutting down their social media mouthpieces”.

Sheikh Khalid rejected the idea that the Houthis had any positive role to play in rebuilding Yemen as they seek to establish an Iranian-backed terrorist state, citing the role that Iran-backed Hezbollah has in Lebanon.

He said: “This is in addition to [Iran’s] smuggling of weapons and explosives and training of terrorists to carry out terrorist operations in Bahrain, Kuwait and other countries.”

Gargash also noted that he was concerned about the missile programme, especially after Iranian-built missiles were fired at Saudi Arabia by the Houthis.

Gargash and Iraq’s Vice President Iyad Allawi expressed fears that Donald Trump’s decision to recognise Jerusalem as the capital of Israel was a gift to radicalism as radical Islamic terrorists, like Iran, are already using it to stir up sectarian violence.

Sheikh Khalid noted that the recent Arab quartet decision to boycott Iran-ally Qatar was a result of attempts by Qatar and Iran to destroy the security and stability of other countries, like Egypt, Yemen, and Libya. He said that Saudi Arabia, the UAE, Bahrain, and Egypt, would re-establish relations with Qatar if it agreed to demands, including ending its support for terrorism.

The Guardian: Russia joined the west in stepping up...

Ahmadinejad declares Iran will not retreat in nuclear dispute