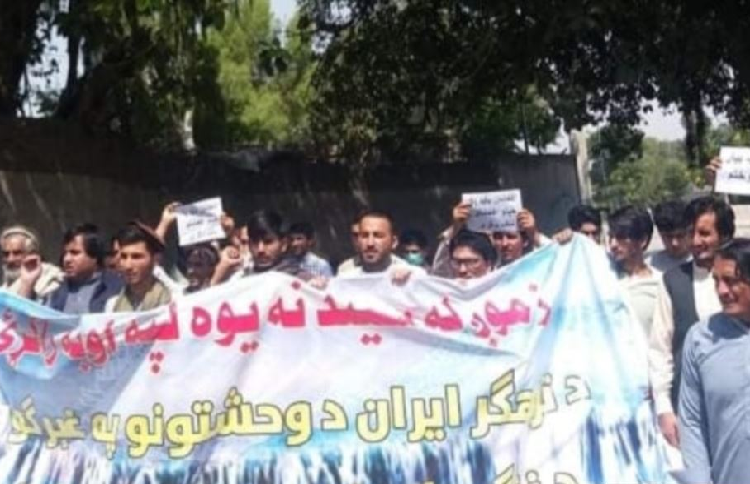 On June 6, the Iranian security forces opened fire on a car carrying Afghan migrants in Yazd province, which led to the car catching fire and burning alive three travelers. Four others were also wounded. Locals saved a boy with burns on parts of his body while he was saying, “Give me some water; I am burning.”

In early May, border guards captured more than 50 Afghan migrant workers in Sistan and Baluchestan province, southeastern Iran, and forced them at gunpoint into the Harirud river. According to the result of the Afghanistan Independent Human Rights Commission, ten of the poor workers drowned.

“Most of the survivors told us in interviews that they had been arrested by Iranian border guards and taken to the Ebrahim-Khani border checkpoint in a village called Dehestan, Jannat Abad district. They were exposed to torture and ill-treatment by the guards at the checkpoint and later forced to enter the Harirud river without equipment. The event contributed to the death of several migrants. The victims and survivors were between 12 and 40 years old. All the migrants were also men. There were altogether 46 Afghan migrants, ten of which died in the event, 15 are still missing, and 21 managed to rescue themselves,” the Afghanistan Independent Human Rights Commission noted in its report.

“Iran’s border guards arrested Afghan workers when they entered Iran and broke their arms and legs with sticks. Then, the guards threw around 50 workers into the water,” said Governor of the Afghan city of Golran, Abdul Ghani Nouri, on May 5.

Also, a survivor said that “They beat and harassed us. Later, they transported us in a vehicle and took us to the sea and threw us into the water in an outlaying place.”

Following the crime, families of the victims in a press conference held on May 28 urged the Afghan government to pressure Iran to put the perpetrators on trial and pay compensation to the grieving families. In this respect, the Governor of Harat state Vahid Ghatali assured these families that “the blood of their loved ones would not be trampled for political interests on the negotiating table.”

On May 18, Geran Hivad, Afghanistan’s Foreign Ministry Spokesperson, announced, “The Afghan government has delivered all related evidence, documents, videos, photos to this issue, which have technically, professionally, and legally been scrutinized, to the Iranian regime. The Afghan government also continues its investigation for achieving justice with full force.”

Notably, the Iranian government has vowed to probe both cases. However, it eventually helped its security forces evade accountability, and instead, it has continued its crime against migrants.

Iran’s security forces also attached survivors of the burning car to the hospital bed with handcuffs while easily abetting criminals under the pretext of protection of the “National Security.”

Simultaneously, the Iranian supreme leader Ali Khamenei shed crocodile tears for other nations who suffer from inequality and injustice. President Hassan Rouhani had also claimed that his government remedies foreign nationalities infected with the coronavirus for free while on the same day, border guards drowned Afghans in the Harirud river.

In response to the Iranian government’s crimes, youths affiliated with the Solidarity Party of Afghanistan held rallies in the Afghan capital Kabul and Helmand cities on June 7. In Kabul, outraged protesters struck the Iranian embassy with paint sacks as a sign of their hatred against the criminal authorities of Iran and demanded their leaders shut down the embassy and expel the Iranian ambassador.

“Death to the tyrant, either in Kabul or in Tehran,” the youths chanted in front of Iran’s embassy.

Earlier, on May 11, Afghan activists organized simultaneous demonstrations in front of Iran’s embassy in Kabul and the ayatollahs’ Consulate in Harat state. According to AFP,  demonstrators chanted slogans, “Death to Khamenei” and “Death to Rouhani.”

History News Network:  Tehran has been outmaneuvering the West, particularly...