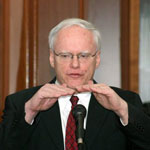 AFP: James Jeffrey, the new US ambassador to Iraq, arrived in Baghdad on Wednesday and presented his diplomatic credentials to the conflict-torn nation’s head of state, the US embassy said in a statement. 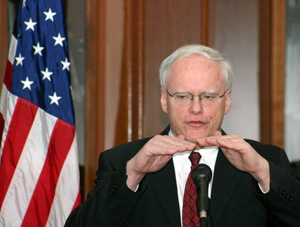 BAGHDAD (AFP) — James Jeffrey, the new US ambassador to Iraq, arrived in Baghdad on Wednesday and presented his diplomatic credentials to the conflict-torn nation’s head of state, the US embassy said in a statement.

Jeffrey, a veteran diplomat with extensive experience of the Middle East, met President Jalal Talabani and Foreign Minister Hoshyar Zebari at ceremonies in the Iraqi capital, it said.

“It is a great honour for me to return to Iraq,” Jeffrey, accompanied by his wife Gudrun, was quoted as saying.

“I look forward to renewing old friendships, strengthening our ties with Iraqi leaders and deepening our civilian engagement for the long term throughout this historic land.”

Jeffrey takes up his post less than two weeks before the US military is due to end its combat mission here, with the number of American troops expected to fall to around 50,000 by the end of August as part of a long-term drawdown.

On August 5, the US Senate unanimously confirmed Jeffrey’s appointment to replace outgoing ambassador Christopher Hill who retired after a 33-year career in the diplomatic service.

Hill left Baghdad last week after a 16-month stint latterly dominated by a political stalemate after deadlocked parliamentary elections on March 7 in which no clear winner emerged and from which no government has taken office.

Jeffrey’s career includes a previous stint in Baghdad — as deputy chief of mission and then charge d’affaires from June 2004 to June 2005 — unlike Hill, who was best known for his high-profile post as the Bush administration’s pointman on North Korea’s nuclear programme.

Jeffrey had most recently served as ambassador to Turkey, a NATO ally that has seen its usually warm ties with Washington frayed over Ankara’s tensions with Israel and opposition to US-backed sanctions on Iran.

Before being appointed to his post in Ankara, he served as deputy national security adviser and assistant to the president at the White House under George W. Bush’s administration.

Prior to this, Jeffrey served as principal deputy assistant secretary for the bureau of Near Eastern Affairs at the State Department, where his responsibilities included leading the Iran policy team.

Jeffrey has also held a number of different posts in Washington, Europe and the Middle East, including as deputy chief of mission in both Kuwait and Turkey. He was posted to Munich, Sofia, Tunis and Adana, Turkey.

He also worked in the Balkans as US ambassador to Albania and was earlier a US Army infantry officer from 1969 to 1976, and served in Germany and Vietnam.

Jeffrey arrived one day after a suicide bomber at an army recruitment centre in Baghdad killed 59 people, most of them prospective soldiers, in the bloodiest attack in Iraq this year.

In addition to the ongoing reduction of American troops, all US soldiers are due to withdraw from Iraq by the end of 2011 under the terms of a bilateral security agreement signed between Washington and Baghdad in November 2008.

While American commanders insist local forces are up to the job, the top Iraqi officer, Lieutenant General Babaker Zebari, said earlier this month that US troops would have to stay until 2020 before his soldiers would be ready.