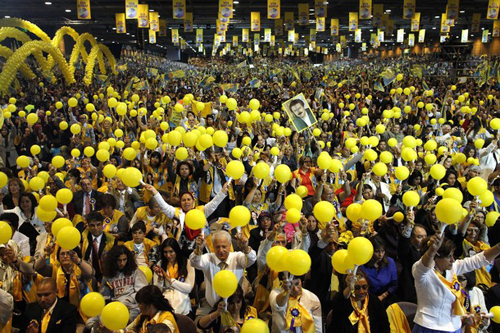 Villepinte, France, Jun. 19 – Tens of thousands of Iranians rallied north of Paris on Saturday calling on the United Nations to protect members of Iran’s main opposition group in Iraq.

The rally which featured speeches by Iranian opposition leader Maryam Rajavi and numerous senior former US officials was attended by supporters of the People’s Mojahedin Organisation of Iran (PMOI / MEK), whose members are mainly based at Camp Ashraf, 60km north-east of Baghdad.

An Iraqi military raid on the refugees in the camp on 8 April left 36 residents killed and several hundred others injured. The attack, which drew praise from Iranian authorities, was condemned by the UN High Commissioner for Human Rights, the US and the European Union.

The Iranians who gathered in the Villepinte Auditorium urged the UN Assistance Mission for Iraq (UNAMI) to take over protection of Camp Ashraf with the help of the US and EU. They denounced an Iraqi plan to relocate the residents inside Iraq, claiming this was a plot advocated by Iran which would lead to an eventual massacre of the residents by Iraqi armed forces. 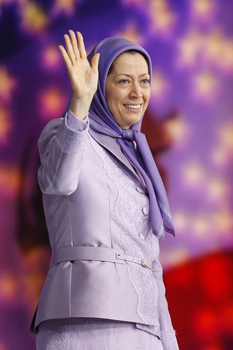 “The world community, in particular the United Nations and the United States, are responsible for the protection and security of Camp Ashraf residents. And we tell them that you have no right to invoke Iraqi sovereignty to justify your inaction in the face of crimes against humanity and war crimes. This blatantly violates your international obligations”, Rajavi said.

“As the European proposal has reiterated, the siege of Ashraf must end immediately. Armed forces must withdraw from the Camp and an impartial investigation into the April 8th massacre must commence at once. … Until the final resolution of this matter, it is doubly important for the UN to assume the protection of Ashraf and for UN monitors to be stationed in the Camp. We ask the US and the EU to only provide the protection of these monitors. This is the least costly and the most urgent demand to protect the lives of the Mojahedin in Camp Ashraf”, she added.

Rudy Giuliani, former New York City Mayor, told the cheering crowd that the US State Department should immediately revoke the terrorist designation of the PMOI, adding that Britain and the EU had done the same after their courts found no evidence linking the group to terrorist acts. His call was supported by former White House chief of staff Andrew Card and former US Secretary of Homeland Security Tom Ridge.

The rally received strong European and Arab support, with the former Prime Ministers of Ireland, Iceland and Algeria as well as the former Speaker of the German Parliament attending and pressing for UN protection for the Ashraf residents.

Lawmakers, mostly from European countries, unveiled a written declaration signed by some 4,000 MPs from 40 countries condemning attacks on Camp Ashraf and calling for the residents’ protection.

Iran brushes off US rocket rebuke

AFP: Iran on Tuesday brushed aside concerns from its...

Iran’s human face is gone. Hardline vote-riggers have spirited it away

The Times: The recent Iranian presidential elections were a...