AFP: Iranian exiles Wednesday rejected a US plan to relocate thousands of outlawed regime opponents from Iraq’s Camp Ashraf to another Iraqi site pending a transfer to nations willing to accept them. 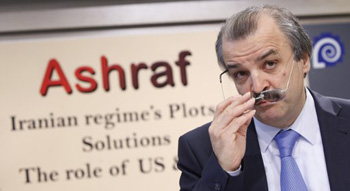 BRUSSELS, July 27, 2011 (AFP) – Iranian exiles Wednesday rejected a US plan to relocate thousands of outlawed regime opponents from Iraq’s Camp Ashraf to another Iraqi site pending a transfer to nations willing to accept them.

The fate of the 30-year-old camp, located near the border with Iran and home to some 3,400 people, has been in the spotlight since an Iraqi security raid in April left 34 dead and scores injured, triggering sharp condemnation.

Speaking on behalf of its residents, the National Council of Resistance of Iran said Ashraf remained under threat from Iraqi troops, and called on UN assistance pending relocation of residents to third countries under a plan outlined by members of the European parliament.

“We ask the UN to establish a permanent monitoring team in Ashraf,” NCRI official Mohammad Mohaddesin said at a news conference.

“We ask all European Union countries and others to help and support the European parliament solution.”

Euro-MPs who travelled to Iraq after the April raid want residents of the camp, set up when Iraq and Iran were at war in the 1980s by the People’s Mujahedeen, to be resettled in Europe, Australia, Canada and the United States.

As US forces prepare to pull out of Iraq, and Tehran steps up pressure on Baghdad to hand over militants, Camp Ashraf has become a mounting problem.

US forces transferred security for the camp in January 2009 and last month Iraqi President Jalal Talabani said Iran and Iraq had formed a joint committee with the Red Cross to shut it down.

“The camp will be shut down by the end of this year,” Talabani said on the sidelines of a counter-terrorism summit in Tehran.

The International Committee of the Red Cross immediately denied it would play any role in the closure of Camp Ashraf.

Meanwhile US Ambassador Lawrence Butler has proposed relocating the residents within Iraq to avert all risk of new violence.

Mohaddesin, whose NCRI encompasses the Mujahedeen group, said the residents had outlined six options for their future, including remaining at the location but under protection by international law and the Geneva Convention.

In the case of a transfer elsewhere, Camp Ashraf residents wanted protection from US forces and a UN observer team, he added.

Reuters: Germany said on Wednesday Iran had to prove...

Iran blames recent Iraqi unrest on US and Israel