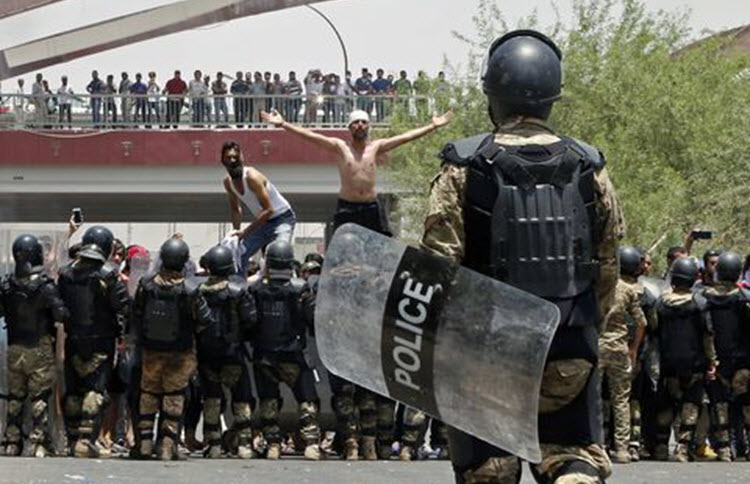 London, 16 July – Chaos is spreading across Iraq like wildfire. With exceptionally hot weather for this time of year, many have the impression that they are living in hell. And it is not just the heat that is creating this feeling, it is the political climate too. There are many problems in the country and there have been for many years.

Revolutions and chaos preceded by invasions are familiar to the country and the city of Basra is particularly suffering now. An escalation of events in the southern part of the country is taking place, weakening the whole country at the same time.

Saddam’s rule was peppered with wars which brought decades of chaos to the area. And then invasion after invasion turned the whole political situation into a real disaster. When Haider al-Abadi took power, things started to cool down. Albeit rather slowly.

The government in Baghdad is unable to be effective, for the sole reason that there are too many players in positions of power. There are political parties and militias that have too much authority, sway and influence and Iran’s role is hugely detrimental to the whole situation.

There is no chance of Iraq ever being truly independent, never mind successful, for as long as Iran is present. The Iranian government sees Iraq as a natural extension of Iran, including in terms of geographical position. Much like it sees Syria.

Iran has been able to take advantage of the political chaos in Iraq and has gone as far as to create even more chaos. It has used its oil revenue to finance its spread and maintenance of chaos in Iraq and it has put numerous bilateral agreements in place. Agreements that only serve the interest of Iran.

Iran has also made great efforts to get an Iran-friendly government elected. Although it did not entirely reach this goal, it has been able to have enough influence to undermine authority in the Iraqi capital.

During the wait for a Prime Minister to be elected, Iraq descended further into chaos.

But what is Iran’s goal in Iraq? Why is it investing so much in Iraq when the domestic issues in Iran are so pressing? Well, it is aiming to do in Iraq what it has done in Yemen and Lebanon. It has opened numerous fronts and managed to weaken those that are trying to defeat it. All the while, Iran is provoking the international community.

Iran’s Islamic Revolutionary Guard Corps (IRGC) is training the militias in southern Iraq. It is trying, most of all, to create the Iraqi equivalent of the Houthi rebels in Yemen and Hezbollah in Lebanon. In simple terms, the IRGC is creating force that will do its dirty work.

If a crisis escalates in the region because of all this, which is a distinct possibility, Iran will no doubt intervene as a pretext to stop the fighting. However, it will demand that certain conditions are accepted. Something that could be very dangerous, not just for the Middle East, but for the international community as a whole.