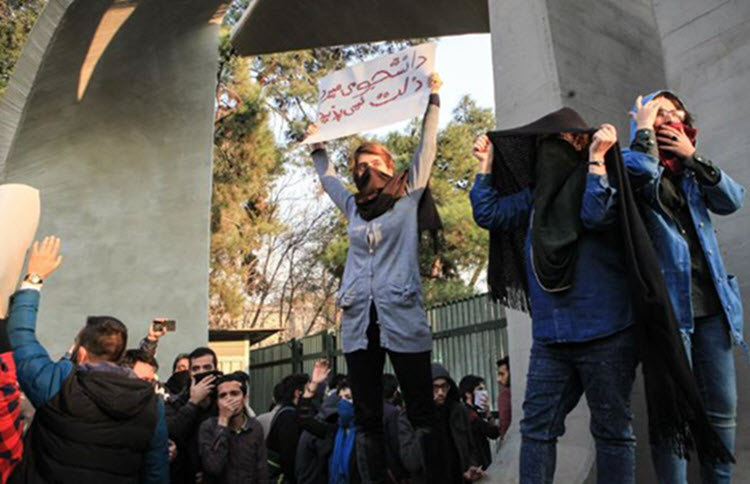 London, 16 July – Many Iranian students joined the December/January protests earlier this year, rallying against economic hardship, and chanting slogans against Supreme Leader ayatollah Ali Khamenei and President Hassan Rouhani, calling for the downfall of the theocratic system and longing for Freedom and Democracy.

According to Iran HRM, Many of these students were subsequently arrested. Now, they are being sentenced to prison terms, and their sentences are being upheld by Iran’s Appeals Courts.

In Tabriz, northwest Iran, on July 10th, the Appeals Court upheld a two-year sentence against Roya Saghiri, who has publicly opposed compulsory hijab, published her own verdict on Wednesday, July 11, in her Instagram account. Meanwhile, in another legal case, Ms. Saghiri has been condemned to a one-year suspended sentence and ten lashes for “disturbing public order, through participation in an illegal rally”, and “removing her headscarf in public”.

As well, a three-month sentence was also upheld by the Appeals Court against Ali Kamrani, a student of English Literature at Tabriz University.

Students Sina Darvish Omran and Ali Mozaffari were convicted of the charges of acting against “national security” and waging “propaganda against the state”. They were each sentenced to eight years in prison in June, for the charge of “assembly and collusion against national security.”

Fereshteh Tousi, a graduate student of Allameh Tabataba’i University in Tehran, was detained for giving a speech on Student Day 2016. He was sentenced to one and half years in prison and a two-year travel ban. His charge was “propaganda against the regime” because he attended a ceremony marking Students Day on December, 6, 2016, that was licensed from the university.

The head of the women’s faction in the parliament, Parvaneh Salahshouri, recently admitted that the number of students being prosecuted for attending December 2017/January 2018 protests is much higher than earlier estimates. In an interview with state-run ILNA news agency on July 10th, 2018, she said, “A list has been put together of the students detained in the December 2017 incidents and they number more than 150, so we’re not talking about just 55 or 90 students. Unfortunately, the issue of student detentions is much more extensive.” Salahshouri added, “The Intelligence Ministry is involved in some of the cases against these students and therefore the government and the ministry itself should explain what’s going on here.”

Reuters: Afghanistan's parliament has appealed to Iran to delay...