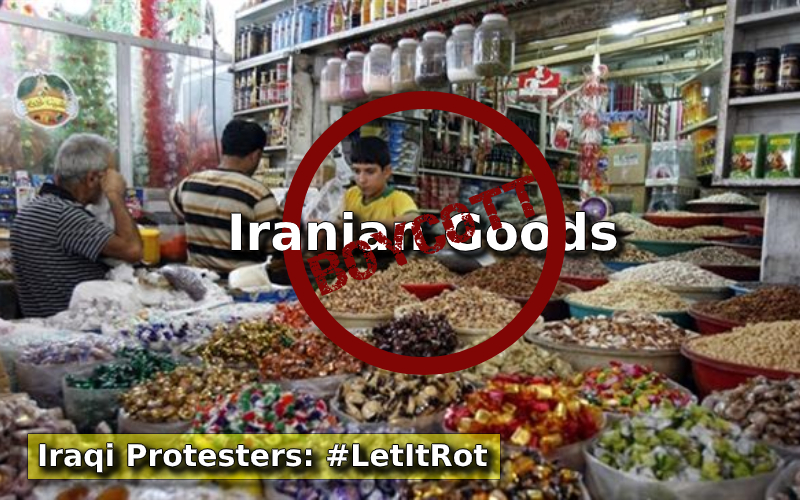 Iraqi people have launched a campaign to boycott goods coming from Iran in the country’s markets. Activists choose a hashtag “Let it rot,” (#خليها_تخيس) for this campaign and call on Iraqis to boycott any product that marked “made in Iran”. 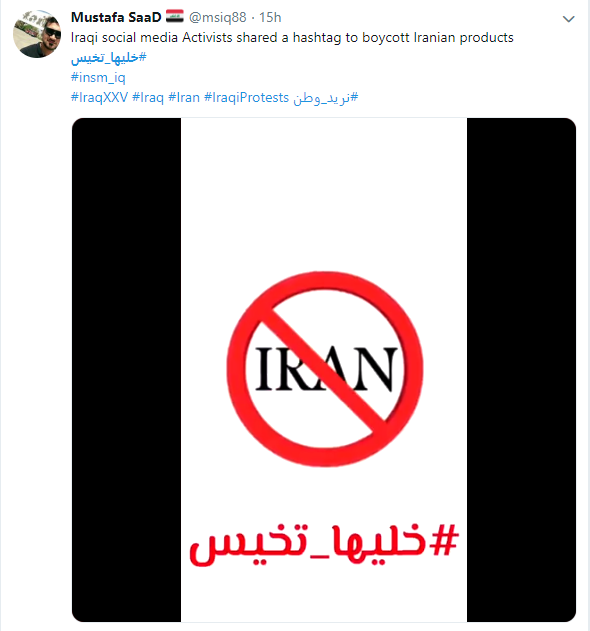 “One of this campaign’s purposes is the punishment of Tehran and pressurizing it to cease its meddling in Iraq,” activists announced on Twitter. Campaign organizers also aim to inspire the people to purchase local products to revive Iraq’s destroyed economy.

This campaign is taking place while day after day the Iraqi people’s uprising is increasingly targeting Iran’s Ayatollahs and their destructive influence in the affairs of this country. During recent days, protesters explicitly chanted against Iran’s Supreme Leader Ali Khamenei and commander of Quds Force Qassem Soleimani in Baghdad, Karbala, and Basra. Outraged demonstrators, furthermore, brought down posters of Khamenei and Soleimani and torched them. It is notable that during recent days there has been more news unveiling the Ayatollahs’ role, especially the role of Qassem Soleimani, in the crackdown on anti-government protests in Iraq.

During the two weeks after protests first swept through #Iraq, Iraqis faced a brutal crackdown launched by the militias and security forces heavily supported by #Iran, which killed more than 180 Iraqi… #protesters.https://t.co/Z2srrNJPXb#Iranfreedom #MEK #Iran@USAdarFarsi pic.twitter.com/GTk480BFra

In recent years, Iraq’s markets have been filled with products imported from neighboring countries. But Iranian products have had the lion’s share of imports due to their low price and quality.

“From March 2018 to March 2019, Iran exported nearly $9 billion worth of goods to Iraq,” semi-official news agency Tasnim reported. Iran’s imported goods include almost anything from cars, plastic products, construction material, vegetables, and also dairy products. According to UN statistics, in 2017, 20% of Iran’s exports to Iraq consisted of plastic products, 8% food, and 6% fruit and fruit products. The “Let it rot” campaign comes amid a growing wave of protests against Iran’s intervention and Tehran-backed militias.” Do not purchase any Iranian goods from the market and let us start standing up to Iran from here because Iraq is has imported Iranian goods more than any other country,” campaign organizers stated on social media.

Nowadays, the rapidly expanding political and social events in #Iraq have become one of the major news in the Middle East. https://t.co/zvXMtclHzV#Iranfreedom #freeiran #MEK@USAdarFarsi pic.twitter.com/4tGZhTWJ1P

AFP: Israel is ready to act alone to stop...