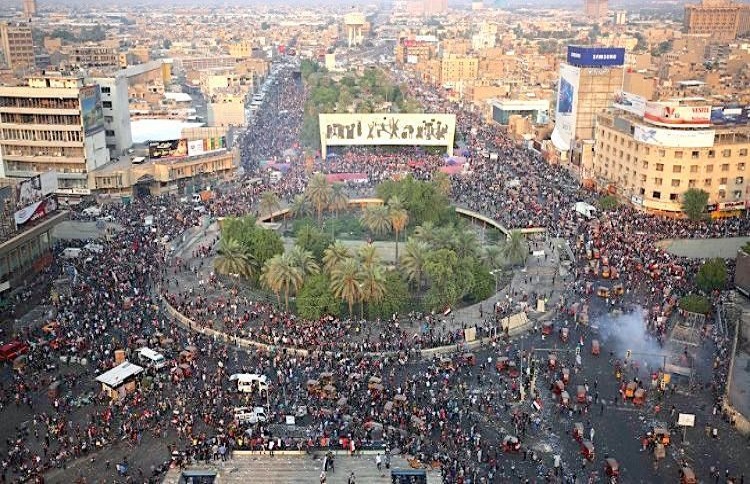 The iconic Tahrir Square in Baghdad has transformed into the capital of this uprising aiming to overthrow the government.

We call on Lebanon’s political leaders to urgently facilitate the formation of a new government that can build a stable, prosperous, and secure #Lebanon that is responsive to the needs of its citizens and free of endemic corruption.

The US Secretary of State Mike Pompeo may not have thought only of the Lebanese and Iraq when he made an urgent appeal to the Lebanese and Iraqi leaders to swiftly form an effective government that would “meet the needs of the citizens”. The words of the US Secretary of State were also indirectly directed against the regime in Iran, whose agents are in the current leadership of Lebanon. The protests, which Pompeo praised as an “expression of national unity,” are a threat to the Islamic Republic – and so are the demonstrations in Iraq.

In both countries, a broad protest movement wants to bring down a system whose representatives are highly corrupt. In both countries, this elite is protected by exploiting the religious division of society and dividing posts among the various sections of the population. And in both countries, the Iranian regime has cleverly used this system for its own purposes, positioning powerful proxies to safeguard Iran’s interests.

Now the net, which Teheran has stretched across the region with patience, ruthlessness, and sophistication, is being shattered in two centralized countries – through popular uprisings that are above all economically motivated. The authoritarian Iranian leadership, which in turn is under enormous socio-economic pressure because of American sanctions, cannot take pleasure from it. No wonder, then, that the shadow of the Iranian Revolutionary Guards is heavy in both countries, Lebanon and Iraq, as it tried to subdue the protests.

In Iraq, the counterattack is brutal. The vicious agents of Tehran have a large share in the fact that the first wave of protests ended in a bloodbath in early October. Protesters were struck by precise shots in the chest or head. Eyewitnesses reported how ambulances were targeted under fire. Thugs stormed the homes of leading protesters. Recently, when a government investigative report was published, with 159 protesters killed, no objection would be expressed, and the actual number of victims was likely to be significantly higher. There has also been sharp criticism because the report does not name the alleged perpetrators by name.

On the other hand, a paper from the American think tank “Washington Institute for Near East Policy” clearly shows how far the Iranian Revolutionary Guards and the Shiite militias led by them were involved in the excesses of violence. Militia commanders and Iranian officers had specially formed a clandestine crisis staff, which organized the crackdown on the protests.

There, for example, information was gathered about activists of the protest movement and the deadly use of snipers was organized. The paper announced names which Qassem Soleimani is among them, the infamous commander of the IRGC Quds Force, an elite Iranian Revolutionary Guards Corps division responsible for missions abroad. It also mentions commanders of irresponsible Shia militias. In addition, leading cadres of “popular mobilization” (Hashd al Shaabi), an umbrella organization mostly Shiite militia, which had been dug in the war against the “Islamic State” (IS). The forces of “popular mobilization” are officially part of the Iraqi government. But some of the militias under the umbrella of the “Hashd al Shabi” play their own game – mostly in the interests of Iran.

The power of the Lebanese Shiite organization is limited

In Lebanon, Hizballah, led by Tehran, is more restrained than the militias in Iraq – if one might cite brutal attacks by thugs on peaceful protesters. The leader of the Shiite organization, Hassan Nasrallah, has made clear threats in his speeches and made it clear that there will be no overthrow with him. His room for maneuver is limited. On the one hand, it damages Nasrallah’s credibility if he, who stylizes himself as the incorruptible guardian of the poor and disenfranchised Shiites, is the patron of the corrupt establishment. And secondly, he does not control the street in his kingdom one hundred percent.

There were protests in the heartland of Hezbollah in southern Lebanon. And in Dahiyeh, the southern suburbs of Beirut, which are dominated by the Hizbullah, displeasure stirs. Anyone who talks to the people on the street about the political situation gets punched propaganda phrases in response, which usually ends with the need to “resist” Israel. But even there are the hardships in everyday life in the face of economic misery sued. It is obvious that the organization’s extensive social system, which has been an attractive alternative to the dysfunctional Lebanese state, has been in trouble since Hezbollah must fund an expensive operation in Syria while Tehran’s contributions because of the US punitive measures are lower. “We have two financial crises in Lebanon,” says Luqman Slim, a Hizbullah expert who lives in Dahiyeh: “The state stuck in one – and the state in the state too.”

Based in part on foreign sources

Hamas says will step up attacks if Israel hits Iran

Reuters: Palestinian militant group Hamas will step up its...