The Iraqi Uprising Spread With a General Strike 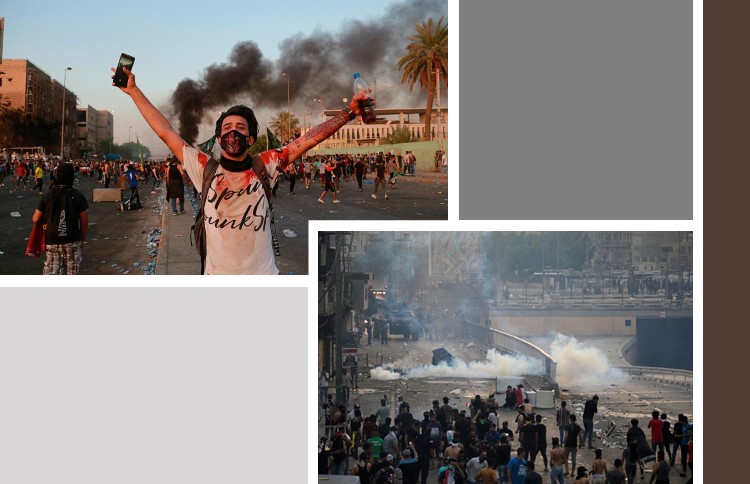 In Baghdad, students gather in Tahrir Square to express their support for the demands of the protesters to overthrow the corrupt government and the Iranian mercenaries.

In Basra, all major roads were closed by burning car tires. In the southern provinces, official working hours were announced to closed in solidarity with the general strike.

The provinces of Dhikhar, Maysan, Babil, and Wasit are also on strike. The General Syndicate of Oil and Gas Employees declared a halt of work in support of the demands of the revolution, in Diwaniyah demonstrators rally in front of the Governorate’s building in clock Square.

Reuters quoted its photographer about the capture of the Senek bridge in Baghdad on Saturday, that Iraqi protesters seized part of a large Baghdad bridge that security forces fled a week earlier.

The protesters also seized a big building overlooking the bridge to control a new area in the center of the Iraqi capital. The protesters are now calling for the Iraqi government to step down and for a change of regime, which has been the main cause of corruption since the US invasion of Iraq in 2003.

The rebels named the building they occupied on the bridge of Senek as ‘martyrs of Tahrir’.

Iraqi security and medical officials say a protester has been killed by a direct hit to the head from a tear gas canister amid fresh clashes on the strategic Baghdad bridge.

The officials said 32 others were wounded Sunday, hours after protesters retook control of half of Ahrar Bridge. The officials spoke on condition of anonymity in line with regulations.

Ahrar Bridge leads to the other side of the Tigris River near the heavily fortified Green Zone, the seat of Iraq’s government.

Security forces had deployed on the other side of the bridge and erected concrete barriers to keep protesters from pushing into the area.

Demonstrators had taken control of these bridges earlier this month but were later repelled when security forces took harsh suppressive measures.

The Iraqi government, at Iran’s request, closed the southern border with Iran.

An Iraqi security source and an Iranian diplomat said Iraq closed the Shalamcheh border crossing with Iran on Saturday for travelers from both countries, Reuters said.

Tehran has demanded the closure because of ongoing public protests in Iran and Iraq. The border will be closed until further notice, the security source and diplomat said.