AFP: The West’s inaction days after threats to launch punitive action against Syria for a deadly chemical weapons attack could badly damage its credibility in tackling other global flashpoints, observers say.
By Catherine Rama 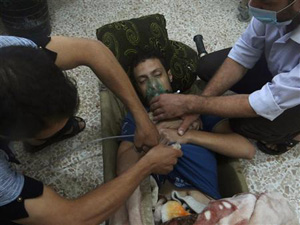 PARIS (AFP)— The West’s inaction days after threats to launch punitive action against Syria for a deadly chemical weapons attack could badly damage its credibility in tackling other global flashpoints, observers say.

“Once Lebanon and Syria and Egypt trembled when Washington spoke. Now they laugh,” observer Robert Fisk wrote in British newspaper The Independent.

“No one in the Middle East takes America seriously anymore,” he wrote.

US President Barack Obama — who famously said that Syrian leader Bashar al-Assad would be crossing a “red line” if he resorted to using chemical weapons — has deferred action and is trying to get Congressional support for military action.

That was after the British parliament in a shock move vetoed Prime Minister David Cameron’s plans for an intervention in Syria in the wake of the August 21 attack in a Damascus suburb which Washington says killed more than 1,400 people.

French President Francois Hollande appears resolute in his resolve to “punish” Damascus but there is mounting opposition to the measure at home and many opposition lawmakers have called for a vote on the issue.

“Through the Syrian case, they are clearly trying to send a message to Tehran. The idea of strikes is to show that the West is not so weak and when it comes to chemical weapons it can act,” said Karim Bitar, the head of Middle East research at the Institute of International and Strategic Relations.

But Bitar said the dithering over how to react on Syria was making the West look “amateurish.”

“One has the feeling that we are improvising and that policies are being made day by day,” he said.

Britain’s Daily Telegraph said Assad’s allies Russia and Iran had shown themselves to be far more resolute and effective than the West, which has backed the opposition.

“Whether it comes to weapons, cash or boots on the ground, either Russia or Iran will actually deliver. And they do not need to worry about parliamentary votes, Congressional support, or indeed public opinion,” the right-leaning newspaper wrote.

The Times of London said in a commentary that the “US administration had lurched from blood-curdling war-like rhetoric to procedural bureaucracy within 24 hours.”

The newspaper in an editorial added that “America makes the world a safer place not only through power but through dynamism and conviction. Today it and its president look lacking in both.”

France’s Le Parisien newspaper reported that Obama was being branded a “coward” in Israeli social media sites. And Germany’s Sueddeutsche Zeitung said witheringly: “Don’t show your Colt if you don’t mean to shoot.”

But Bitar said he did not believe US lawmakers would reject Obama’s proposal, even if the debate was heated.

“There has not been an instance of a military action sought by the president being refused since 1973,” he said.

“If nothing happens, if we cancel any military strike, that could be seen as a sign of weakness, but I think things have gone too far” for the West to completely back down, he said.

AFP: Two American warships have crossed through the Strait...