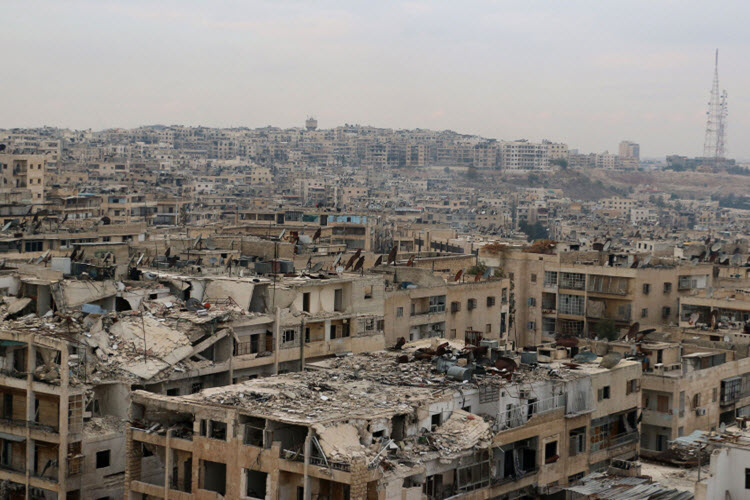 London, 21 Nov – Iranian-led troops are launching an attack on the Syrian Resistance on behalf on Syrian dictator Bashar al-Assad.

The Iranian Regime has taken Shiite troops from Lebanon, Iraq, Pakistan and Afghanistan to reinforce the Syrian military and try to seize opposition-held Aleppo.

This includes terrorist forces like Hezbollah and the Iranian Revolutionary Guards.

They are backed up by another Assad ally, Russia.

If the militias win, it could tip regional power in favour of Iran, according to Fawaz Gerges, professor of Middle Eastern politics at the London School of Economics.

He said: “A defeat of the rebels in Aleppo would be a turning point in which Assad captures most of the urban centres of Syria. It would be a setback for Saudi Arabia in its rivalry with Iran, which, as a result, would see its influence in Syria increase even more.”

Last week, the militias attacked Aleppo and caused further destruction to the Resistance Forces there.

Phillip Smyth, an expert on Shiite militias at the Washington Institute for Near East Policy, said: “[The militias] are building a force on the ground, that, long after the war, will stay there and wield a strong military and ideological influence over Syria for Iran.”

He continued: “And there is not much Assad can do to curb the rising influence of these groups, even though Syrian officials are clearly concerned about this because the militiamen are literally preventing the overthrow of his government.”

The Washington Post stated that this has proved frustrating to US officials, as the US backs the democratic Syrian Resistance but also has a nuclear deal in place with Iran.

Aleppo has been the target of attacks from the Syrian and the Iranian dictatorships for a long time now; blockading food, clean water, and medical supplies and destroying hospitals and hotels indiscriminately.

The opposition forces launched a counteroffensive but struggled to break through.

Zakaria Malahfiji, a member of the Fastaqim rebel force, which is affiliated with the umbrella Free Syrian Army, said: “They are fighting with passion, and they fight in well-coordinated attacks.”

The opposition forces, labelled terrorists by the Syrian Regime, actually view the expansionist Iranians as the extremists and the Assad dictatorship as the aggressors.

Their revolt began peacefully in 2011 but erupted into violence following the Syrian Regime’s attacks on them.

Abdulmunem Zaineddin, a religious scholar involved with rebel forces in the battles in Aleppo, said: “They are spreading Iran’s influence and their extremist ideology, but our revolution is not about religion; it’s about freedom and dignity.”

The Iranian troops claim to be protecting Islamic shrines but their troops are nearly always sent far away from the holy sites.

UPI: Russia offered Wednesday to resume construction of a...