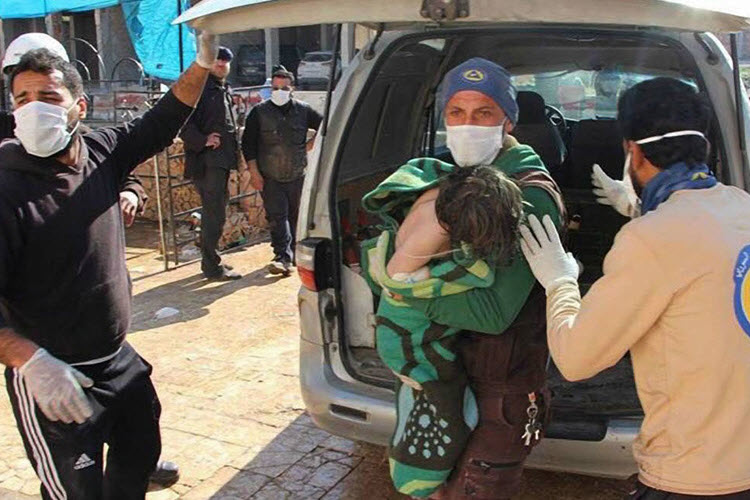 London, 18 Apr – While the US strike on the Shayrat Air Base in Syria was seen as a defiant strike against the dictator Bashar al-Assad; it was also a strike on Iran, who helped supply Syria with the chemical weapons to kill its own people.

The missile strike, on April 6, was a retaliation for the chemical attacks – widely believed to be the work of Syrian Government forces- which killed 100 people and left another 400 wounded.

The Iranian Revolutionary Guards Corps(IRGC) were at Shayrat when the US dropped their bomb; a place that they would have no business being anywhere near, if, as they’ve said, they were not involved in the Syrian Civil War.

The truth is that Iran has been working with Syria to create chemical weapons capable of decimating a population since at least 2004.

This means that even though then-President Barack Obama struck a deal to remove all chemical weapons from Syria in 2013 after a similar attack killed almost 1,500 civilians, Iran just refilled the supplies.

The former head of Syria’s weapons research program, Brig.-Gen. Zaher al Sakat said that Assad hid large amounts of nerve agents -including Sarin gas- after the deal was reached with the US.

Sakat said: “They [the regime] admitted only to 1,300 tonnes, but we knew in reality that they had nearly double that.”

Benjamin Weinthal, a fellow for the Foundation for Defence of Democracies, wrote in the Jerusalem Post: “[There’s] mounting evidence of [Iran’s] role in developing Syria’s chemical warfare arsenal coincides with both countries’ efforts to modernise their biological and chemical weapons systems.”

He cited a WikiLeaks reports which noted that Iran’s biotechnology sector was more advanced than Syria’s and that the two regimes shared their deadly knowledge.

He also cited German intelligence agencies who called Iran a ‘danger state’ last year for its efforts to get technology for atomic, biological or chemical weapons, in order to further their political ambitions.

The agencies revealed that German companies had been targeted by Iran in an attempt to buy equipment that could be used to manufacture such weapons, as they do not have the capability to manufacture the weapons themselves.

This strike, which punished both the Syrian Regime and the Iranian Regime, was aptly summed up Bill Kristol on Twitter: “Punishing Assad for use of chemical weapons is good. Regime change in Iran is the prize.”

He highlighted that whilst punishing Assad is good, it is better to take those who commit heinous crimes out of power.

Lawyer: Iranian in Italy arms probe out of jail

AP: A lawyer for an Iranian journalist jailed in...

RFE/RL: Whos afraid of girls? The Iranian government, it...