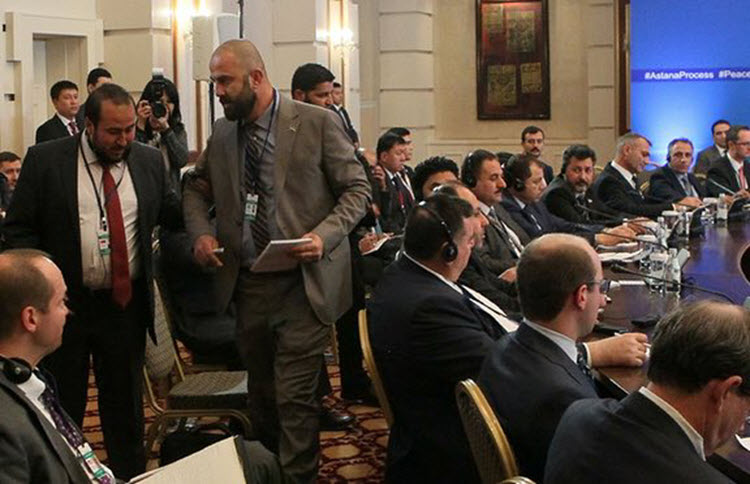 London, 5 May – An agreement calling for the creation of four “safe zones” in Syria was signed by Turkey, Iran and Russia, but rejected by opposition fighters, who walked out of a press conference where the deal was announced, in the Kazakh capital, Astana.

The opposition delegation said they would never accept Iran as a guarantor of a peace process, and criticized Russia, claiming that there was a huge gap between its promises and actions. They suggested that the plan may lead to the disintegration of Syria.

Aimed at reducing the violence in Syria, where six-years of conflict has killed more than 400,000 people, the Astana talks are negotiations held under the auspices of the UN, and involve the Syrian political opposition.

The use of weapons would be forbidden in the safe zones, where the restoration of infrastructure and essential services and the return of refugees would begin, according to a three-page memorandum from the Astana talks seen by the Russian Kommersant newspaper. Humanitarian aid would be allowed to these zones, which include significant rebel-controlled enclaves in areas such as Idlib and Homs, the eastern Ghouta suburbs outside Damascus, and in the south of the country.

A cautious welcome was offered to the announcement by the US State Department, but they have concerns, especially about the involvement of Iran. A statement was released that said, “Iran’s activities in Syria have only contributed to the violence, not stopped it, and Iran’s unquestioning support for the Assad regime has perpetuated the misery of ordinary Syrians.”

It said, additonally, “In light of the failures of past agreements, we have reason to be cautious. We expect the regime to stop all attacks on civilians and opposition forces, something they have never done. We expect Russia to ensure regime compliance.”

The proposal is a chance at a breakthrough. The zones would halt conflict in the specified areas. Iran, Russia, Syria, Turkey and the US — major countries with a military stake in the conflict –– all endorse the creation of safe zones.

Fighting will be allowed to continue outside the safe zones, especially against Islamic State and other extremist terror groups.

Reports that western intelligence may know of three locations where the Syrian government is still making chemical weapons, in breach of undertakings given to the UN and the Organisation for the Prohibition of Chemical Weapons, made America initially reluctant to embrace the Russian safe zone plan.

According to BBC reports, intelligence documents show chemical and biological munitions being produced at three main sites near Damascus and Hama. They are all branches of a government agency, the Scientific Studies and Research Centre. It’s alleged that both Iran and Russia, the Syrian government’s allies, have knowledge of Syria’s activity.

Last month the French government published an intelligence report that claimed, “France considers that Syria, despite the commitment to destroy all its stocks and capacities, has maintained a productive capacity.”

Opposition figures walked out of the talks on Wednesday, protesting about continued Syrian air force attacks, and questioning why the anticipated ceasefire would not cover the entire country. They returned on Thursday, but it is not yet clear whether or not their objections will collapse the agreement.

A spokesman for the Free Syrian Army, Osama Abu Zaid, said, “We demand guarantee of aid entry, the immediate release of detainees and a cessation of hostilities.” He demanded that the FSA reject “any initiative, military or political agreement if it is not based on UN resolutions.”

Although concerned about the Astana process, and preferring the UN-backed Geneva talks, which focus on a long-term political settlement rather than a military ceasefire, this week Donald Trump sent a top diplomat to observe the Astana discussion.

The Syrian foreign ministry, which is not a signatory to the agreement, said the regime backed the safe zone proposal. That represents a concession by Bashar al-Assad, who previously called it “not a realistic idea at all”.

A solution to the Syrian crisis may not yet be possible. Regardless of the opposition losing control of east Aleppo in December, Assad hasn’t the forces to defeat the rebel troops outright, and the war has turned into many geographical disputes.

Reactions to UN decision to impose sanctions on Iran  Canada