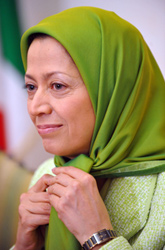 London, Jul. 16 – Maryam Rajavi, who heads the main Iranian opposition coalition National Council of Resistance of Iran (NCRI) welcomed a United States appeals court verdict Friday casting doubt on the terrorist status of the People’s Mojahedin Organisation of Iran (PMOI), the principal group within the NCRI. The ruling said that the U.S. Secretary of State, in refusing to revoke the designation of the PMOI, had violated the due process rights of the group and had not given it the opportunity to rebut the allegations against it.

The 3-panel federal appeals court said: “We are unsure what material the Secretary in fact relied on or to what portion of [the anti-terrorsim law] she found relevant”.  The court added: “Some of the reports included in the Secretary’s analysis on their face express reservations about the accuracy of the information contained therein.”

The court remanded with instructions to Secretary of State Hillary Clinton to provide the PMOI the opportunity to “review and rebut the unclassified portions of the record on which she relied”.

Rajavi, in a faxed statement from her headquarters north of Paris, said: “While upholding justice and abiding the law made it necessary that this oppressive and unjust designation should have been completely annulled as was decided by judges in the United Kingdom and the European Union, nevertheless, this very judgment and the remand to the Secretary of State demonstrates that the terrorist label against the PMOI, and the insistence to continue it, has been merely a political decision in the framework of appeasing the bloodthirsty mullahs and based on the illusion of changing the behaviour of the medieval regime ruling Iran”.

“The legal and logical conclusion of this judgment requires the Secretary of State to revoke the terrorist designation of the PMOI and remove all its adverse consequences without any delay. This designation has been from the very start an abuse of power and an attempt to assist the Iranian regime’s machinery of execution and torture. From this point on, maintaining the PMOI on the list would be a brazen defiance of law and the judgment of the court of appeals”.

Rajavi said the terrorist label on the PMOI had been the “most important impediment to change” in Iran and “contributed greatly in preserving the religious dictatorship”.

“Despite these obstructions, however, Iran is on the verge of change, which will be realized by the Iranian people and their organized resistance”, she said.

The EU last year removed the PMOI from its blacklist after a string of rulings in the group’s favour at the European Court of Justice. Britain lifted its ban on the group in 2008 after its Court of Appeal ruled that charges that the PMOI was involvement in terrorism were “perverse”.