The Guardian: Conservative Iranian newspaper raises concern that rare 6th century BC Babylonian artefact may not be returned 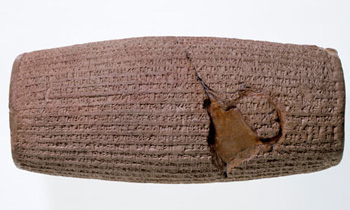 It was not an easy decision for the British Museum to lend one of its most treasured artefacts to a country which has a notoriously prickly relationship with the UK. So curators in London are paying close attention to an Iranian threat not to return the famous Cyrus Cylinder — now embroiled in political intrigue in the Islamic Republic.

The 6th century BC Babylonian object, sometimes described as the world’s first human rights charter, arrived in Iran at the weekend and is due to be displayed for four months at the national museum.

In a ceremony on Sunday President Mahmoud Ahmadinejad draped a Palestinian-style keffiyeh scarf worn by Basij militiamen over the shoulders of a bowing actor dressed as Cyrus. He also described Cyrus reverentially as “King of the World” – a striking phrase in a country where pride in Iran’s pre-Islamic past, encouraged by the shah, has been downplayed since the 1979 revolution. For Ahmadinejad’s domestic enemies, this was another glaring example both of his self-promotion and a religious-nationalist agenda that arouses their deepest suspicions.

“Isn’t it correct that the Cyrus Cylinder belongs to Iran?” asked the Keyhan newspaper, mouthpiece of hardline conservatives. “Isn’t it true that the British government stole this valuable and ancient object of ours? If the answer to these questions is positive, which it is, why should we return [it] … to the party which stole it.”

The correct answer, insists the British Museum, is that the cylinder was not stolen but excavated in Babylon, Iraq in 1879. Its loan was a triumph of cultural diplomacy for Neil MacGregor, the museum’s director, after relations between London and Tehran were strained to breaking point with the expulsion of British Council staff from Iran, the launch of the BBC Persian TV channel, and the violent and repressive aftermath of last summer’s disputed presidential election.

The loan reciprocates those made by Iran’s national museum to the successful Forgotten Empire and Shah Abbas exhibitions at the British Museum.

The cylinder is due back in Bloomsbury in January. “There is no sense that this is anything other than a loan,” said a museum spokesperson. “This is part of our ongoing relationship with the national museum of Iran which both institutions value as a cultural dialogue independent of political difficulties.”

But it seems destined to be the centre of controversy for as long as it stays in Tehran. Elyas Naderan, a fundamentalist MP, criticised the government for inviting British ambassador Simon Gass to Sunday’s reception.

Ayatollah Makarem-e-Shirazi, an influential cleric, denied rumours that he wanted to see the cylinder. “He never visits any exhibition apart from Qur’anic ones,” a statement said.

Critics on the left point to the irony of the president’s celebration of the cylinder as “a charter against injustice and oppression” as he oversees unprecedented human rights abuses. The opposition Jaras website called the object “a stranger in its own home”. Cyrus would have been shocked to hear Ahmadinejad invoke his name, it said.

“Ahmadinejad was apparently trying to appeal to a new constituency among non-political types and tap into discontent with the clerical establishment, while at the same time trying to keep his hard-line supporters happy,” commented Golnaz Esfandiari in her Persian Letters blog.

The long history of the Cyrus Cylinder

Cyrus, king of Persia from 559-530 BC, conquered Babylon in 539 BC and captured Nabonidus, the last Babylonian king, with the aid of Marduk, the god of Babylon. The nine-inch clay cylinder, now 2,500 years old, praises Cyrus’s kingly virtues, listing his genealogy as a king from a line of kings.

Written in Babylonian cuneiform, it describes how Cyrus (Koroush in Persian) restored shrines dedicated to different gods and repatriated deported peoples who had been brought to Babylon. It was this decree that allowed the Jews to return to Jerusalem after their expulsion by Nebuchadnezzar II and rebuild their temple.

The cylinder was popularised round in the world in the late 1960s by the shah of Iran, Mohammad Reza Pahlavi, who arranged to borrow it from the British Museum in 1971 for his famously lavish celebration of the 2,500 anniversary of the monarchy at Persepolis. At the time the Iranian press campaigned for its transfer to Iranian ownership. A replica is kept at UN headquarters in New York City.

Baroness Helena Kennedy, the human rights lawyer and trustee of the British Museum, said of the loan of the cylinder: “Art and culture can sustain relationships between peoples even when diplomacy is strained. To present this particular temporary gift to the people of Iran at this particular time is an act of faith which will have profound meaning and value.”

The Guardian: Officials of Barack Obama's administration have drafted...