AFP: A tongue-in-cheek US birthday message to Iranian President Mahmoud Ahmadinejad over Twitter may not have reached the intended recipient, but triggered a rebuke from someone else — Sarah Palin. 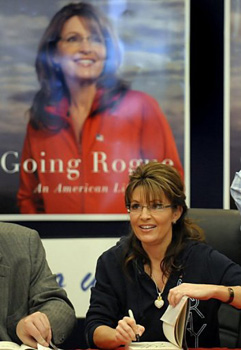 WASHINGTON (AFP) — A tongue-in-cheek US birthday message to Iranian President Mahmoud Ahmadinejad over Twitter may not have reached the intended recipient, but triggered a rebuke from someone else — Sarah Palin.

State Department spokesman Philip Crowley, learning from reporters that Ahmadinejad celebrated turned 54 on Thursday, took to the micro-blogging service to ask him to release two US hikers detained in Iran since last year.

“Happy birthday President Ahmadinejad. Celebrate by sending Josh Fattal and Shane Bauer home. What a gift that would be,” Crowley tweeted.

“Your 54th year was full of lost opportunities. Hope in your 55th year you will open Iran to a different relationship with the world,” read another tweet.

Palin, the Republican Party’s 2008 candidate for vice president who enjoys a following among conservatives, was not amused.

“Happy B’day Ahmadinejad wish sent by US Govt. Mind boggling foreign policy: kowtow (and) coddle enemies; snub allies. Obama Doctrine is nonsense,” she wrote in her own message on Twitter.

Palin highlighted Ahmadinejad’s past calls for the destruction of Israel.

Crowley defended himself on Friday.

“My tweet was simply to suggest that a reasonable celebration of President Ahmadinejad’s birthday would be to release Shane Bauer and Josh Fattal,” Crowley told reporters.

“I can’t imagine why Sarah Palin would object to the release of the two hikers who remain in custody, we think inappropriately,” he said.

The Obama administration has voiced disappointment at Iran’s response and tightened sanctions on the clerical regime over its disputed nuclear program.

Bush: All options are on the table over Iran