AFP: Gambia has severed its ties with Iran, ordering all the Iranians representing their government to leave the country within 48 hours, the west African nation said Monday. 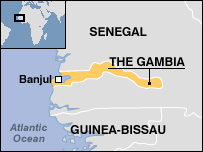 BANJUL, Gambia (AFP) — Gambia has severed its ties with Iran, ordering all the Iranians representing their government to leave the country within 48 hours, the west African nation said Monday.

Gambia gave no reason for cutting ties with Iran, which has been involved in many projects in what is said to be the smallest country on the African continent.

“The Gambia government hereby requests all Iranian nationals representing the interest of the government of Iran in the Gambia to leave the country within 48 hours from the effective date stipulated through a notification issued to the Government of Iran,” the statement said.

Both ostracised internationally, with Iran under sanctions for its nuclear programme and Gambia accused of rights abuses, the two nations have repeatedly declared their support for each other.

Iranian President Mahmoud Ahmadinejad said in 2006 that both nations were under pressure from “bullying” powers while Gambia has supported Iran’s right to develop its nuclear capabilities.

Ahmadinejad paid a visit to the country in November 2009 to cement ties.

The two countries were mentioned in conjunction last week when Nigeria reported the discovery of an illegal arms shipment from Iran, including rockets and grenades, to the UN Security Council.

Iran, under four sets of UN sanctions over its disputed nuclear programme including a ban on arms sales, said the shipment was by a private company and was on its way to a west African country, later named as Gambia.

Reuters: A U.S. Senate panel will consider legislation this...

By Jubin Katiraie The Iranian Mullahs are destroying the...