AFP: Iranian President Mahmoud Ahmadinejad on Monday dismissed documents released by whistleblower WikiLeaks as “worthless” and ‘mischief” which would not affect Tehran’s relations with its Arab neighbours. 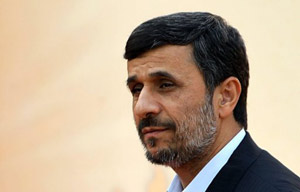 TEHRAN (AFP) — Iranian President Mahmoud Ahmadinejad on Monday dismissed documents released by whistleblower WikiLeaks as “worthless” and ‘mischief” which would not affect Tehran’s relations with its Arab neighbours.

“The documents that they released are a mischief. We do not see any value in them. This act is worthless,” he said at a press conference broadcast live on state TV.

“These documents are prepared and released by the US government in a planned manner and in pursuance of an aim. It is part of an intelligence warfare and will not have their desired political impact.

“We are friends with the regional countries and mischievous acts will not affect relations,” he said.

The US diplomatic memos from Arab countries in the Gulf released by WikiLeaks uncover a fixation on the Iranian nuclear threat as well as fear that conflict is inevitable.

According to an April 2010 memo, Saudi King Abdullah has repeatedly pressed the United States to attack Iran to halt its nuclear programme, saying the US should “cut off the head of the snake.”

The cables also show that Abu Dhabi’s Crown Prince Mohammed bin Zayed as early as 2005 expressed support for military action against Iran. “I believe this guy is going to take us into war,” he said in 2006 of Ahmadinejad. “Al-Qaeda is not going to get a nuclear bomb; Iran is a matter of time,” he said in 2009.

King Hamad of Bahrain, meanwhile, told US General David Petraeus in November 2009: “That (nuclear) programme must be stopped …. The danger of letting it go on is greater than the danger of stopping it.”

Another message shows that Kuwait Interior Minister Jaber Khaled al-Sabah believes “the US will not be able to avoid a military conflict with Iran, if it is serious in its intention to prevent Tehran from achieving a nuclear weapons capability.”

Several Gulf governments also warned that if Iran goes nuclear, they could too — or that they could invite foreign powers to place nuclear weapons on their territory.

“It’s not good for confidence-building,” the adviser added.

No other nation in the oil-rich Gulf has yet reacted publicly to the US diplomatic cables.

Another document, cited by the New York Times, shows that US intelligence believes Iran has obtained advanced missiles from North Korea capable of striking Europe.

The newspaper, quoting a diplomatic cable dated February 24, said “secret American intelligence assessments have concluded that Iran has obtained a cache of advanced missiles, based on a Russian design.”

Iran obtained 19 of the North Korean missiles, an improved version of Russia’s R-27, from North Korea, the cable said, and was “taking pains to master the technology in an attempt to build a new generation of missiles.”