AFP: Interior Minister Mostafa Mohammad Najjar charged on Friday the CIA was involved in the suicide bombing in southeast Iran as the death toll rose to 36. 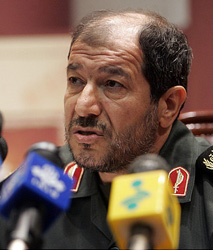 TEHRAN (AFP) — Interior Minister Mostafa Mohammad Najjar charged on Friday the CIA was involved in the suicide bombing in southeast Iran as the death toll rose to 36.

“From the inspection of equipment obtained from the terrorist elements of this crime, it has become clear that the CIA and other spy agencies were involved,” he was quoted as saying on state television’s website.

Najjar did not give details.

“Our people know the objective of the enemy. They realise that the arrogance (West) does not want the Muslim world to be sovereign,” Khamenei said in a message read out at a funeral for victims of the attack.

“Enemies do not want to see the unity of Muslims,” he added.

Iranian officials previously accused US and British intelligence services of having a hand in Wednesday’s attack in the city of Chabahar but without naming any specific agency.

The attack on a Shiite religious procession was claimed by Sunni militant group Jundallah (Army of God), which says it is fighting for the rights of the region’s Sunni ethnic Baluchi community against Iran’s Shiite regime.

Iranian media on Friday said the death toll has climbed to 36 from the suicide bombing during the annual Shiite mourning rituals of Ashura, while dozens of others were wounded.

Nine people linked to the bombing have reportedly been arrested.

Reuters: Iran will seek to boost its oil output...