RFE/RL: Afghan journalist and author Abdul Razaq Mamoon is being treated in a Kabul hospital after a masked man sprayed acid on his face and hands. 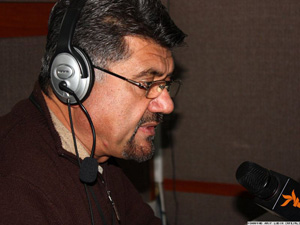 Afghan journalist and author Abdul Razaq Mamoon is being treated in a Kabul hospital after a masked man sprayed acid on his face and hands.

The incident took place on January 18 when Mamoon was returning home. The journalist, a former RFE/RL correspondent, says he was wearing glasses at the time of the attack, which saved his eyes from critical injury.

The 46-year-old native of northern Panj Shir, who is known for his controversial political views, believes the attack was in retaliation for his latest book, which is critical of Tehran’s policies toward Afghanistan.

Afghan President Hamid Karzai said he was “saddened by the [cowardly] attack” and called Mamoon, offering to send him abroad for medical treatment.

“President Karzai contacted Mr. Mamoon straight away after he heard about the incident. And the president has ordered medical institutions to do everything possible to treat Mr. Mamoon,” Ilmi says.

“The second issue is to bring to justice those involved in this crime. An order has been issued in this regard, too, and an investigation will be carried out by our police and security agencies. Right now, the most important issue is the treatment of Mr. Mamoon. The president of Afghanistan is ready to assist in his treatment here in Afghanistan or abroad. That’s why we’ve come here.”

Rahimullah Samandar, the chairman of the Association of Independent Journalists of Afghanistan, is also calling for an urgent investigation into the attack.

In “Footprint Of Pharaoh,” Mamoon accuses neighboring Iran of seeking the disintegration of Afghanistan. The book also claims Iran was involved in the assassination of Ahmad Shah Masud, the commander of Afghanistan’s Northern Alliance and a legendary figure among the country’s ethnic Tajiks.

“After the book was published, it seemed some people and some circles were very unhappy and angry about it. These people have close ties with Iran,” Mamoon told RFE/RL from his hospital bed today.

“The Iranian Embassy invited the publisher of my book…to the embassy to answer their questions. He responded that Mamoon is himself the writer and publisher of his book and that the embassy should contact [me] directly. After that, some Afghans who are spying for Iran were signaling to me and sending messages to me to stop the distribution of the book.”

Mamoon, an ethnic Tajik, is known for controversial remarks seen by some as hostile to Pashtuns, Afghanistan’s largest ethnic group. In the past, he has accused an ethnic Pashtun politician of plotting former communist President Najibullah’s murder by the Taliban in 1996.

Mamoon is currently the editor in chief of the Bost-e Bastaan news agency. He worked for RFE/RL’s Kabul Bureau between 2002 and 2006. He was subsequently hired by Tolo TV as a host of a political talk show. But he was fired after the private television station came under pressure over Mamoon’s hard-hitting interviews with top politicians and warlords.

Mamoon spent time in prison during Afghanistan’s communist regime in the 1980s.