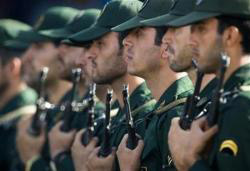 The penalties freeze any assets that the officials, including two relatives of Syrian President Bashar Assad, as well as Syria’s General Intelligence Directorate and the Qods Force of the Iranian Revolutionary Guard Corps may have in U.S. jurisdictions and bar Americans from doing business with them.

The White House said the penalties affect Maher Assad, Assad’s brother and commander of the Syrian Army’s Fourth Armored Division, which is accused of carrying out the worst atrocities in the southern city of Daraa; Assad cousin Atif Najib, the former head of the Political Security Directorate in Daraa Province; and intelligence chief Ali Mamluk.

“The United States strongly condemns the Syrian government’s continued use of violence and intimidation against the Syrian people,” according to the U.S. statement. “We call upon the Syrian regime and its supporters to refrain from further acts of violence and other human rights abuses against Syrian citizens seeking to express their political aspirations.”

The penalties probably will have limited direct impact because none of the targets is believed to have any significant assets in U.S. banks. But officials said the move was aimed at sending a clear message to the Syrian people that those responsible for the crackdown are going to face consequences and no one in the Syrian leadership will be immune.

Although Assad himself is not among those mentioned Friday, officials said he could be named at a later date if the crackdown continues. In a related move, the Commerce Department said it was revoking licenses for the export to Syria of items relating to VIP aircraft used to transport senior Syrian officials.

Syria is already under U.S. sanctions because it’s designated a “state sponsor of terrorism” by the State Department. The new ones extend the penalties to individuals.

Iran and its Revolutionary Guard Corps are under similar U.S. punishment. The officials said the new designation for the Revolutionary Guard would add another layer of penalties and make clear that Washington believes it is providing material support to help Syrian authorities with the crackdown.

Friday’s announcement came as Syrian security forces opened fire on demonstrators trying to break an army blockade on Daraa, while thousands across the country defied a protest ban and denounced Assad. At least 42 people were killed, including 15 in the march on Daraa, according to witnesses and a human rights group.

The U.N. Human Rights Council agreed to begin a U.N.-led investigation and demanded that Syria stop the violence, release political prisoners and lift restrictions on the news media and access to the Internet.

Man pleads guilty to plot to sell weapons to Iran