In shift, Egypt warms to Iran and Hamas, Israel’s foes

New York Times: Egypt is charting a new course in its foreign policy that has already begun shaking up the established order in the Middle East, planning to open the blockaded border with Gaza and normalizing relations with two of Israel and the West’s Islamist foes, Hamas and Iran. 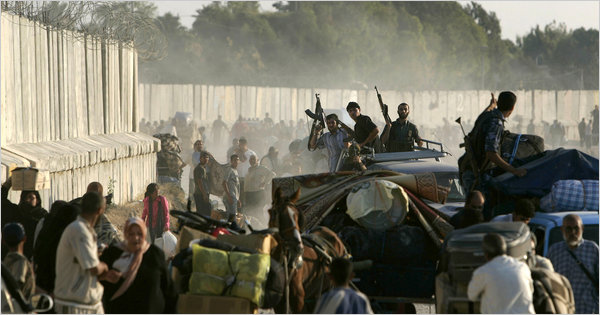 CAIRO — Egypt is charting a new course in its foreign policy that has already begun shaking up the established order in the Middle East, planning to open the blockaded border with Gaza and normalizing relations with two of Israel and the West’s Islamist foes, Hamas and Iran.

Egyptian officials, emboldened by the revolution and with an eye on coming elections, say that they are moving toward policies that more accurately reflect public opinion. In the process they are seeking to reclaim the influence over the region that waned as their country became a predictable ally of Washington and the Israelis in the years since the 1979 peace treaty with Israel.

The first major display of this new tack was the deal Egypt brokered Wednesday to reconcile the secular Palestinian party Fatah with its rival Hamas. “We are opening a new page,” said Ambassador Menha Bakhoum, spokeswoman for the Foreign Ministry. “Egypt is resuming its role that was once abdicated.”

Egypt’s shifts are likely to alter the balance of power in the region, allowing Iran new access to a previously implacable foe and creating distance between itself and Israel, which has been watching the changes with some alarm. “We are troubled by some of the recent actions coming out of Egypt,” said one senior Israeli official, citing a “rapprochement between Iran and Egypt” as well as “an upgrading of the relationship between Egypt and Hamas.”

“These developments could have strategic implications on Israel’s security,” the official said, speaking on the condition of anonymity because the issues were still under discussion in diplomatic channels. “In the past Hamas was able to rearm when Egypt was making efforts to prevent that. How much more can they build their terrorist machine in Gaza if Egypt were to stop?”

Israel had relied on Egypt’s help to police the border with Gaza, where arms and other contraband were smuggled to Hamas through tunnels.

Balancing its new independence against its old allegiances, Egypt is keeping all its commitments, including the peace treaty with Israel, Ambassador Bakhoum emphasized, and she said that it hoped to do a better job complying with some human rights protocols it had signed.

But she said that the blockade of the border with Gaza and Egypt’s previous enforcement of it were both “shameful,” and that Egypt intended soon to open up the border “completely.”

At the same time, she said, Egypt is also in the process of normalizing its relations with Iran, a regional power that the United States considers a dangerous pariah.

Several former diplomats and analysts said that by staking out a more independent path, Egypt would also regain a measure of power that came with the flexibility to bestow or withhold support.

If Egypt believes Israel’s refusal to halt settlements in the West Bank is the obstacle to peace, for example, then “cooperating with the Israelis by closing the border to Gaza did not make sense, as much as one may differ with what Hamas has done,” argued Nabil Fahmy, dean of the public affairs school at the American University in Cairo and a former Egyptian ambassador to the United States.

Many Egyptian analysts, including some former officials and diplomats who served under then-President Hosni Mubarak, say they are thrilled with the shift. “This is the new feeling in Egypt, that Egypt needs to be respected as a regional power,” said Emad Gad, a foreign policy expert on relations with Israel at the official Al Ahram Center for Political and Strategic Studies.

Egypt is recognizing Hamas, he said, for the same reason the Egyptian prime minister recently had breakfast with his family at a public restaurant without heavily armed body guards: any official who wants to stay in government is thinking about elections. “This is a new thing in Egyptian history,” Mr. Gad said.

Mahmoud Shokry, a former Egyptian ambassador to Syria under Mr. Mubarak, said: “Mubarak was always taking sides with the U.S., but the new way of thinking is entirely different. We would like to make a model of democracy for the region, and we are ensuring that Egypt has its own influence.”

In the case of Iran, a competing regional power, Ms. Bakhoum noted that although Egypt broke off relations with the Islamist government after its 1979 revolution, the countries reopened limited relations in 1991 on the level of a chargé d’affaires, so normalizing relations was more of an elevation than a reopening.

The deal between the Palestinian factions capitalized on the forces unleashed around the region by Egypt’s revolution. In its aftermath, Hamas found its main sponsor, the Assad government of Syria, shaken by its own popular protest movement, while the Fatah government in the West Bank faced throngs of young people adapting the chants of the Egyptian uprising to the cause of Palestinian unity.

Egypt had laid out a proposal virtually identical to the current deal for both sides as early as 2009, several participants from all sides said. But the turning point came in late March, about six weeks after the revolution.

For the first time in years of talks the Hamas leaders were invited to the headquarters of the Egyptian Ministry of Foreign Affairs instead of merely meeting at a hotel or the intelligence agency — a signal that Egypt was now prepared to treat Hamas as a diplomatic partner rather than a security risk.

They also met with Egypt’s interim head of state, Field Marshal Mohamed Tantawi, the leader of the Supreme Council of the Armed Forces and Mr. Mubarak’s longtime defense minister.

“When I was invited to the meeting in the Foreign Ministry, that was something different, and this is what the agreement grew out of,” said Taher Nounou of Hamas. “We definitely felt that there was more openness from the new Egyptian leadership.” Foreign Minister Nabil el-Araby told the Palestinians that “he doesn’t want to talk about the ‘peace process’ any more, he wants to talk about the peace,” Ambassador Bakhoum said.

She said the Egyptian government was still studying how to open the border with Gaza, to help the civilians who lived there, and to determine which goods might be permitted. But she said the government had decided to move ahead with the idea.