AP: Iran’s President Mahmoud Ahmadinejad on Wednesday urged the U.N. Security Council to take action over the rioting in Britain, arguing it was hypocritical in its reaction to such events. 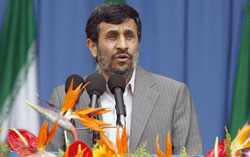 TEHRAN, Iran (AP) — Iran’s President Mahmoud Ahmadinejad on Wednesday urged the U.N. Security Council to take action over the rioting in Britain, arguing it was hypocritical in its reaction to such events.

Ahmadinejad, whose government is under international sanction for its controversial nuclear program and has been condemned by the Western countries such as Britain for its handling of protests and dissent, also called on British officials to listen to the demands of their people.

“The U.N. is silent. Human rights bodies are silent,” Ahmadinejad said on state radio following a Cabinet meeting. “If one percent of this happens in countries that oppose the West, they scream until they are hoarse.”

“Why is the Security Council silent?” he said, also questioning its willingness to take action directed at one of its five veto-wielding permanent members.

Iran’s nuclear file has been a fixture before the council, where the United States, Britain, China, Russia and France hold permanent seats. The other 10 spots rotate between other U.N. member states, and the council is the only body within the United Nations that can authorize any punitive measure, including military action, on countries.

Tehran is under several rounds of sanctions for its disputed nuclear program — one which the United States and its allies believe is aimed at developing nuclear weapons. Iran disputes that claim, saying the program is for peaceful purposes only, such as generating electricity.

Ahmadinejad’s comments appear to be a direct jab at Britain, which supported the opposition movement during postelection turmoil in 2009.

Iranian opposition members say scores were killed in heavy crackdowns by government forces and militia allied to Ahmadinejad, while hundreds more were either wounded or carted off to prison. The government has said 30 people were killed in the protests.

The unrest in Britain began Saturday after an initially peaceful protest over a police shooting in a London neighborhood turned violent. It has since spread to other cities in the country.

Iranian state media has seized on the rioting as an opportunity for payback, dubbing the violence there a “civil war.” Hardline lawmakers have urged London to allow an Iranian human rights delegation to monitor the situation in the country.

In comments directed at Britain’s leadership, including Prime Minister David Cameron, Ahmadinejad said the officials should “stand by their own people.”

“They should change their attitude, change their management and deal with their own people instead of intervening in others’ affairs,” he said, referring to Britain’s role in Afghanistan, Iraq and its participation in the NATO airstrikes on Libya.

“They were claiming that they are a role model and advocator of freedom, human rights and democracy, but what behavior do they apply in dealing with their own people,” said Ahmadinejad.

Daily Telegraph: William Hague has warned Iran that it...