Bill Clinton says US must mull all options on Iran

AFP: Former US president Bill Clinton said in a television interview to be shown Wednesday that President Barack Obama should not rule out military action on Iran, but there might be other ways “to skin the cat.” 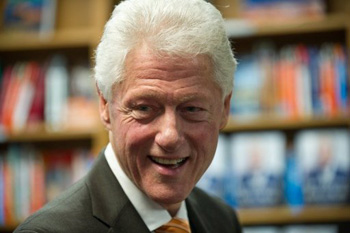 WASHINGTON (AFP) — Former US president Bill Clinton said in a television interview to be shown Wednesday that President Barack Obama should not rule out military action on Iran, but there might be other ways “to skin the cat.”

Clinton also said a recent report by UN inspectors showed that Tehran’s efforts to obtain a nuclear weapon “seemed to be pretty far along the road,” and amounted to what “was the biggest unkept secret in the world.”

“I mean, when you ask yourself what are your options here, I do not believe the president should take any military option off the table,” Clinton told Fox News host Bill O’Reilly’s “The O’Reilly Factor” show, according to an excerpt.

“But there may be more than one way to skin the cat,” said former president Clinton, noting that a virus last year in systems at its nuclear facilities had pretty much “gummed up their computer capacity.”

“There may be efforts right now that we don’t even know about,” he said.

Iran announced Tuesday that it had moved most of its government websites from foreign-based hosts to domestic providers to protect itself from cyber attacks.

Clinton said in the interview that since his wife Hillary became Secretary of State for Obama he had not read the White House daily security briefings he is entitled to as an ex-president, but warned that military options might fail.

“What a lot of Americans and Israelis are worried about is if you try to bomb the facility you still got to deal with the centrifuges, they are underground in an urban area,” Clinton told O’Reilly.

“I will tell you what bothers me, just me as a citizen, knowing what I know about this, the Iranians I think would be crazy to ever launch a nuclear weapon because their whole society would disappear,” Clinton added.

The Pentagon on Tuesday moved to play down remarks from US Secretary of Defense Leon Panetta that suggested Iran’s nuclear program was more advanced than previously thought and could be realized in “sometime in around a year.”

A hard-hitting report from the UN’s Vienna-based International Atomic Energy Agency in November came the closest yet to accusing Iran outright of seeking to develop nuclear weapons. The Islamic republic rejected the claim as “baseless.”

On Tuesday, however, Tehran invited the UN atomic watchdog to visit the country, although Western diplomats said it was unclear whether inspectors would have access to sites where covert nuclear weapons activity is suspected.