Reuters: An exiled opposition group said on Thursday it had obtained information about a secret underground nuclear site under construction in Iran, without specifying what kind of atomic activity it believed would be carried out there. 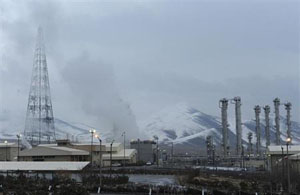 PARIS (Reuters) – An exiled opposition group said on Thursday it had obtained information about a secret underground nuclear site under construction in Iran, without specifying what kind of atomic activity it believed would be carried out there.

The dissident National Council of Resistance of Iran (NCRI) exposed Iran’s uranium enrichment facility at Natanz and a heavy water facility at Arak in 2002. But analysts say it has a mixed track record and a clear political agenda.

In 2010, when the group said it had evidence of another new nuclear facility, west of the capital Tehran, U.S. officials said they had known about the site for years and had no reason to believe it was nuclear.

The latest allegation comes less than a month after the election of a relative moderate, Hassan Rouhani, as Iran’s new president raised hopes for a resolution of the nuclear dispute with the West, and might be timed to discredit such optimism.

The Islamic Republic says its nuclear energy program is entirely peaceful and rejects U.S. and Israeli accusations that it is really seeking the capability to make nuclear weapons.

But its refusal to curb sensitive nuclear activity, and its lack of full openness with the U.N. nuclear watchdog agency, have drawn tough Western sanctions and a threat of pre-emptive military strikes by Israel.

The NCRI said members of its affiliated People’s Mujahideen Organisation of Iran (PMOI) inside the country had “obtained reliable information on a new and completely secret site designated for (Iran’s) nuclear project”.

The NCRI, which seeks an end to Islamist theocratic rule in Iran, is the political wing of the PMOI, which fought alongside Saddam Hussein’s forces in the Iran-Iraq war in the 1980s.

The NCRI said the site was inside a complex of tunnels beneath mountains 10 km (6 miles) east of the town of Damavand, itself about 50 km northeast of Tehran. Construction of the first phase began in 2006 and was recently completed, it said.

The group released satellite photographs of what it said was the site. But the images did not appear to constitute hard evidence to support the assertion that it was a planned nuclear facility.

A spokesman for the dissidents said he could not say what sort of nuclear work would be conducted there, but that the companies and people involved showed it was a nuclear site. The group named officials it said were in charge of the project.

“The site consists of four tunnels and has been constructed by a group of engineering and construction companies associated with the engineering arms of the Ministry of Defense and the IRGC (Iran’s elite Revolutionary Guards force),” the NCRI said.

Asked about the report, International Atomic Energy Agency spokeswoman Gill Tudor said in Vienna: “The agency will assess the information that has been provided, as we do with any new information we receive.”

A Western diplomat accredited to the IAEA told Reuters: “I have heard nothing. My first suspicion is that it is like the 2010 revelation – a tunnel facility the Iranians are keeping quiet, but no known link to the nuclear program.”

Iran said in late 2009 that it planned to build 10 more uranium enrichment sites on top of its underground Natanz and Fordow plants, but has provided little additional information.

Refined uranium can provide fuel for nuclear power plants, which is Iran’s stated aim, but can also be used to make atomic bombs, which the West fears may be Tehran’s ultimate goal.