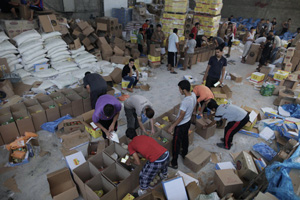 The move strained Hamas’ ties with Iran, an Assad supporter that had also provided weapons to Hamas.

That’s created an opportunity for Islamic Jihad, another armed group that has presented a growing challenge to Hamas’ authority in Gaza. Instead of giving arms and money to Hamas, Iranians have largely shifted their support to Islamic Jihad.

Dozens of men and women lined up in front of trucks carrying pictures of the Iranian flag.

The distribution comes as Gazans are facing shortages of fuel and other supplies due to the military coup in Egypt. Hamas had close ties with ousted President Mohamed Morsi, but the new military-led government has blamed Hamas for stirring unrest in the Sinai. It has sealed or destroyed many smuggling tunnels from Gaza to Egypt and restricted access through the Rafah border crossing.

AFP: A Congressional panel released a report that alleges...