More than 300 rally in Anaheim for protection of Iranian refugees

Orange County Register: Rep. Dana Rohrabacher, R-Costa Mesa, joined more than 300 Iranian-Americans on Saturday at a conference calling on the United States to use diplomatic efforts to intercede on behalf of 3,100 Iranian refugees housed on a former U.S. military base in Iraq. 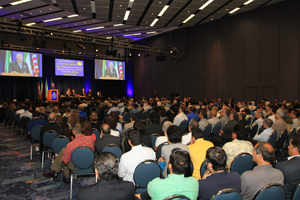 ANAHEIM – Rep. Dana Rohrabacher, R-Costa Mesa, joined more than 300 Iranian-Americans on Saturday at a conference calling on the United States to use diplomatic efforts to intercede on behalf of 3,100 Iranian refugees housed on a former U.S. military base in Iraq.

The refugees – many of them members of a dissident group Mujahedeen-e-Khalq or MEK – were promised protection by the U.S. military in return for disarming when U.S. forces invaded Iraq in 2003, according to the California Society for Democracy in Iran, which organized the event.

“They were promised by us, the United States, that they would have safe passage, that they would then be able to go to countries that would give them safe haven,” Rohrabacher said. “We cannot break our promise to them without spreading the word to all others who oppose the regime that you can’t trust us.”

Oversight of the group’s safety was transferred to the Iraqi government when the U.S. withdrew troops.

Seven people died and dozens were wounded during a rocket attack on the camp in February, after the protective barriers were removed. The congresswoman wants to see protections strengthened at the camp, Castellanos said.

“America must stand with those refugees in Camp Liberty,” Rohrabacher said. “We must stand with the people in Iran who are fighting the mullahs or in the end we will pay a terrible price for giving up our principles.”

The CSDI is asking for the U.S. to work with the Iraq government to relocate the residents of Camp Liberty – now called Camp Hurriya– and also calling on the government to recognize MEK as a legitimate opposition movement.

The MEK, also called the People’s Mujahedeen of Iran, opposes Iran’s clerical regime and has carried out assassinations and bombings in Iran. The group renounced violence in 2001 and President Barack Obama’s administration took the MEK off the U.S. terrorism watch list in September, stating: “The secretary [of state’s] decision today took into account the MEK’s public renunciation of violence, the absence of confirmed acts of terrorism by the MEK for more than a decade, and their cooperation in the peaceful closure of Camp Ashraf, their historic paramilitary base.”

Sanchez, Rohrabacher and Rep. Alan Lowenthal, D-Long Beach, were among 100 co-sponsors of House Resolution 89 in February, which condemned the February attacks on the camp and called on Obama to work with the Iraqi government to ensure the protection and eventual resettlement of the camp residents.

Former U.S. Attorney General Michael Mukasey, former Congressman Patrick Kennedy and staffers from the offices of Sanchez and Rep. Ed Royce, R-Fullerton, also spoke to an enthusiastic and appreciative audience at the event.

Mukasey suggested that the audience begin calling members of Congress, asking thatimprovements at Camp Liberty be made a condition of any future military aid packages to Iraq.

“The residents of Camp Liberty have to be rescued, and the U.S. is the only power on earth that can do that,” Mukasey said.

Saturday’s event also marked the 25th anniversary of the 1988 executions of political prisoners in Iran, and several of the speakers took the opportunity to voice concerns and apprehension about the newly elected Iranian President Hassan Rowhani.

“It was encouraging to see that members of Congress really care about the Iranian people,” said Kayvan Kaboli of San Diego, adding that he planned to follow Mukasey’s suggestion and begin lobbying Congress personally. “This is the best way we can go about pursuing our goals.”