AFP: An Iranian opposition leader urged the United Nations Thursday to help free seven Iranians she said were being held in Iraq after a massacre at a camp for exiles killed 52. 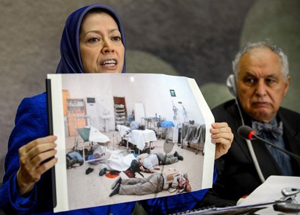 GENEVA (AFP)— An Iranian opposition leader urged the United Nations Thursday to help free seven Iranians she said were being held in Iraq after a massacre at a camp for exiles killed 52.

The seven Iranian exiles, members of the People’s Mujahedeen Organisation of Iran (PMOI), disappeared after a September 1 attack in Camp Ashraf, northeast of Baghdad, that left 52 people dead.

The PMOI charges that special Iraqi security forces that answer to Prime Minister Nouri al-Maliki were behind the slaughter. Iraqi authorities blame infighting within the PMOI for the deaths.

The group’s leader Maryam Radjavi says the seven survivors are in Iraqi custody, and risk being sent back to Iran where they could face torture of forced disappearance.

“I call on the High Commissioner for Human Rights, Navi Pillay, to take the necessary urgent measures to save these hostages. A first step would be a call for their liberation,” Radjavi, head of the People’s Mujahedeen of Iran, told a conference at the UN in Geneva.

She pointed out that the seven were asylum seekers who have a right to protection under the Geneva Convention.

The UN and Western governments have condemned the Camp Ashraf attack, but have been careful not to assign blame.

Pillay has demanded an “independent, thorough and transparent” probe of the mass-killing.

The 42 other survivors of the mass killing were transferred last week to Camp Liberty, a former US military base on the outskirts of Baghdad where some 3,000 other members of the group are housed.

Radjavi, also voiced concern for the Camp Liberty residents, pointing out that 112 PMOI members had been killed in 17 different attacks since US troops withdrew from Iraq at the end of 2011.

The PMOI was founded in the 1960s to oppose the shah of Iran and later the country’s clerical rulers, and set up camp in Iraq during Saddam Hussein’s war with Iran in the 1980s.

It was disarmed after the US-led invasion of Iraq in 2003, and today’s Shia-majority and Tehran-friendly government in Baghdad is eager to see it move elsewhere.

For years, the UN has been searching for countries willing to host the exiles.

U.S. scrambles for information on Iran

New York Times: As President Obama and his advisers...

Boeing’s Deal with Iran is a Disgrace