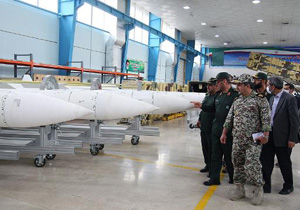 “In order to counter aerial attack, we have put the production of the Sayyad-2 missile system on the agenda,” Dehqan said on state television during the inauguration ceremony.

“This solid-fuel missile system is able to destroy different kinds of cruise missiles, bombers, drones and helicopters,” he added.

Television also broadcast footage of the system in operation.

Dehqan did not specify the range of the system, first test-fired in 2011, that is the optimised version of the ground-to-air Sayyad-1 used against medium-altitude targets.

In September, the military paraded missiles with a nominal range of 2,000 kilometres (1,250 miles) that could theoretically hit Israeli and US military targets in the region.

In his speech at the parade marking the anniversary of the outbreak of the 1980-88 war with Iraq, President Hassan Rouhani insisted that the weaponry was purely defensive.

Tehran has been at loggerheads with world powers over its disputed nuclear programme, which both the West and Israel suspect is aimed at making an atomic bomb, despite repeated denials.

Iran’s arch-foes, the United States and Israel, have not ruled out taking military action against its nuclear facilities.

Iran signed a contract with Russia in 2007 to buy advanced ground-to-air weapons — which can take out aircraft or guided missiles — at a cost of $800 million.

But in 2010 then-president Dmitry Medvedev cancelled the contract after coming under strong US and Israeli pressure not to proceed with the sale, sparking strong protests from Tehran.

Saturday’s inauguration of the new missile system comes as world powers and Iran held a third day of crunch talks on the nuclear issue in Geneva.

Senior diplomats have reported progress in the talks, but also said there was no certainty of a deal.

Reuters: The United States has denied visas to Iranian...

NGOs Issue Statement to UN Over Murderers in the Iranian Judiciary