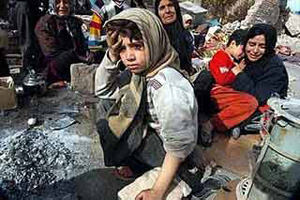 When the workers belonging to the middle and low economic class go home in Iran the majority of them cannot even get respite from a hard day’s work, with food in their belly since a majority of them (estimated 70%) are surviving under the poverty line.

Rahmatollah Poormoussa, who is the head of Iran’s state labor organization, says that, “Many workers cannot even afford the basic products they need for survival, and many of these items are now considered luxuries”. The economic crisis that Iran faces has drowned a majority of the population in poverty; even those with two jobs cannot stay afloat.

This is signified by the statistics that show that the purchasing power of workers fell by 73% this year while the minimum monthly salary is 170 US Dollars; however surviving in Iran requires roughly twice the amount of that nearing 400 US Dollars for a family of four. The lack of funds eventually causes hunger and starvation amongst the populace and Iranian Minister of Labor and Social Welfare, Ali Rabi’i recently stated that twelve million people are suffering from “food poverty” in Iran.

Lack of food leads to malnutrition amongst children and eventually increases the disease and illness amongst the population. Not to mention the situation as a whole where there is a huge gaping difference between the poor and the rich of Iran, almost twelve million people lie hungry in bed at night while the smaller part of the statistic the rich upper class are well fed and obese.

Deputy Health Minister Mr Ali-Akbar Sayari has said that he regretted that seventy eight percent of Iranians lack fresh fruit and vegetables and do not have a good diet. This is a situation of the utmost importance that needs to be resolved as quickly as possible because the lives of so many are involved and a great injustice is being done.

A hard working man cannot even feed his wife and children because he is not being paid enough or because the prices of fruit and vegetables has gone too high and he cannot purchase it, Let alone get his children educated and run the whole house hold. This economic crisis that has descended on Iran is a result of the faulty governing of the country, corruption and use of the tax money on ulterior motives and agendas instead of tackling and fulfilling the basic needs of the citizens.

Mrs Maryam Rajavi, the elected president of the Iranian Resistance, said on February the eight in Paris, “Iranian households suffer from hunger due to poverty and destitution. Twelve million sleep hungry each night.” She also said that, “If the Mullahs ignore the economic implosion it would lead to the eruption of popular protests.”

By Jubin Katiraie In a shocking confession, Mohamad Reza...

Washington Post: The Bush administration has authorized the U.S....